PEOSTA, Iowa, April 10, 2022 – Following is the text of the sermon/eulogy that Rev. Brendan Freeman, acting abbot of New Melleray Abbey here in northeast Iowa, delivered on Saturday, April 9, at the funeral of Rev. Jim O’Connor, a monk who died very early Friday morning at the age of 98.

Father Jim O’Connor belonged to what Tom Brokaw called the “Greatest Generation.”  In his book by that name, Brokaw pays tribute to the World War II generation for their everyday heroism in extraordinary times.  Father Jim enlisted in the Army Air Corps at the age of 19 in 1943.  As a 20-year-old he was piloting a B-17 bomber and for the next two years, he flew 35 combat missions and was awarded the Distinguished Flying Cross.  Extraordinary time indeed. 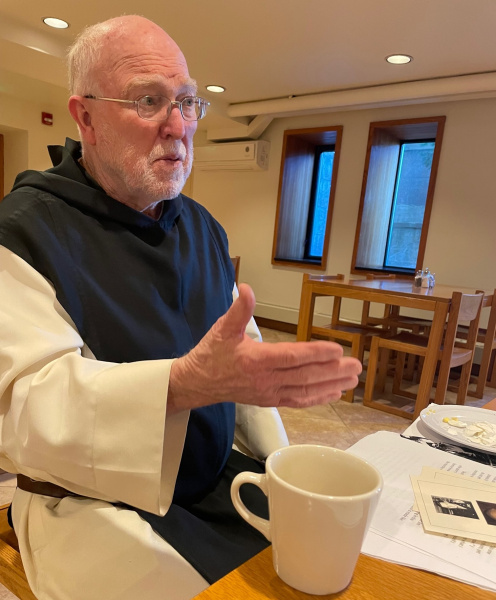 Father Brendan Freeman, pictured here, delivered this eulogy of Father Jim O’Connor.  Father Brendan began his service at New Melleray Abbey in 1958, and for 30 years led the community as the elected abbot. He is now the appointed “Superior Ad Nutum,” or acting abbot.  He has also served in a few other monasteries over his career.

In 1949 he entered New Melleray Abbey.  When Abbot Eugene sent him an acceptance letter, Jim wrote a thank you note – it’s still in his file here – in which he states, “For almost a year now I have prayed in my imperfect way for this end.  I know that there is a great love to be found at New Melleray, and I hope to be made worthy to participate in it.”  This he did for 73 years! I am sure that at the end of his life if someone asked about his prayer, he would say it was still imperfect. All any of us can say at the end of our life is, “Lord, have mercy on me a sinner.”

Once, many years later, when his good friend Chuck Offenburger asked if prayer and meditation were still important to him, Father Jim said, perhaps without realizing the depth of this answer, that “Now it is more like an interior prayer life that I have. I find I pray much of the time without words. I feel like I make direct contact with God in my thoughts, and then specific words aren’t important.”  Thoughts fill our mind all day long.  We are constantly talking to ourselves in what is called a speechless monologue.  Jim turned that into a speechless dialogue, a silent communication where the heart of a creature speaks to the heart of the creator. There is a silent language that God uses to speak to us and us to him.  God is a spirit and we are a spirit, and the Holy Spirit teaches us by his holy anointing the language of the soul.  We all have it but like Jim, we have to allow ourselves to find it, or better, to be found by it.

Every Christian life is a mystery, none moreso than that of a monk. Monks are said to live a life of prayer and if someone asks us what good does that do, we have no convincing answer. If we look at Jim’s life from the outside, at the externals, say, his real inner life is hidden from us – it is veiled, like the veil that covers all the people, as Isaiah tells us in the first reading.  Except for his two years in the service, Father Jim had a very ordinary monastic life.  He taught philosophy for three years, he was the best bricklayer in the community, and when the building program was completed, he cut the grass.  Not very exciting but he loved it.  Did he pray while he was cutting the grass?  Probably, but it was that voiceless prayer of the heart. 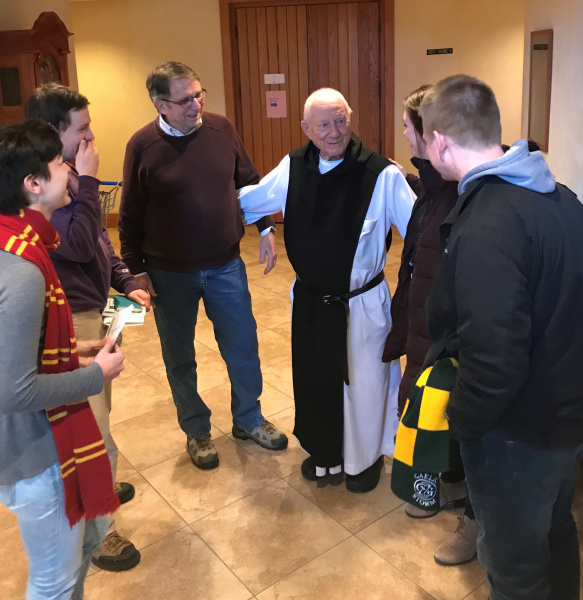 In January 2018, Father Jim O’Connor and Chuck Offenburger are shown welcoming members of the Notre Dame University folk music choir who performed at the monastery and overnighted there.  Offenburger talked the choir members into singing the Notre Dame Alma Mater for Father O’Connor, who spent his first two years of college there.  He went on to graduate from DePaul University.

Somehow Father Jim knew there was a great love to be found at New Melleray.  Evidently he found it because he stayed with us 73 years.  He said he prayed for a year to be accepted into the community, and we could now add, that he prayed 73 years to be accepted into something much better than New Melleray.  Jim said his prayer was imperfect, and I venture to say the love he found here was imperfect also.  But now it is a different story.  St. Paul says our outer self is decaying day by day but our inner self is being renewed day by day.  For this slight momentary affliction is preparing us for an eternal weight of glory.  (2 Cor. 4:16.)  We do not see this or even feel it, but we believe it.

Let me conclude with a quote from St. Augustine’s Confessions.  “No one knows a person’s innermost spirit except the person’s own spirit within them, yet there is something in a human being that even his own spirit does not know.”  I think we can all attest to this.  Augustine continues, “I will confess therefore what I know about myself and also what I do not know.  The knowledge I have of myself I possess because you have enlightened me; while the knowledge of myself that I do not yet possess will not be mine until my darkness shall be made as the noonday sun before your face.” (Tuesday, 8th week of the year Breviary.)

Death is not easy to understand and we have cause to mourn it. But for Jim, who spent 73 years being accepted by the community and participating in the love he knew was here, it is a cause of great joy because his darkness is made like the noonday sun before the face of God. 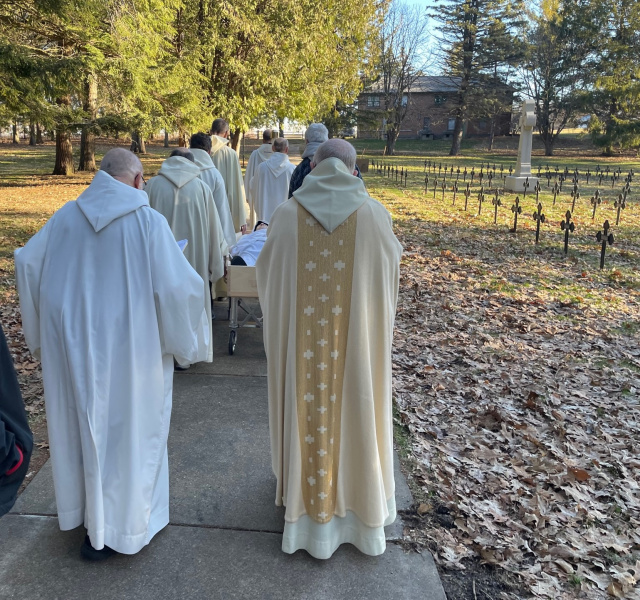 The monks of New Melleray Abbey carrying their brother Father Jim O’Connor to his grave in the abbey’s cemetery, after his funeral early on the morning of Saturday, April 9.

You can learn more about Father Brendan Freeman, the acting abbot of New Melleray Abbey, from Freeman himself in a YouTube video from New Melleray.  He explains his priestly vocation and his life at New Melleray. You can access that right here: https://www.youtube.com/watch?v=_l8aQXrChLM.  You can contact Father Brendan via the monastery’s website by clicking here: New Melleray – A Cistercian Abbey

3 thoughts on “Here’s the eulogy of Father Jim O’Connor, by the acting abbot at New Melleray Abbey”