GRAND JUNCTION, Iowa, Sept. 23, 2022 — The Democratic Party seems alive and well in Greene County, judging by a turnout of 88 people at the party’s annual fundraising dinner here Thursday night. Inspired by a fiery speech from Deidre DeJear, the party’s nominee for governor, the crowd several times erupted in cheers, applause and a standing ovation when she finished.

“My story of being becoming successful in Iowa is a reminder that all of us can be successful in Iowa,” said DeJear, of Des Moines, who grew up in Mississippi and Oklahoma, came to Drake University on an academic scholarship, and never left. “Some might say it was luck.  But it wasn’t luck, it was freedom. I found my freedom in Iowa.”

And with that freedom came lots of opportunities in education, business and politics.

You can read an earlier story we published here on Offenburger.com about DeJear and her campaign by clicking right here. 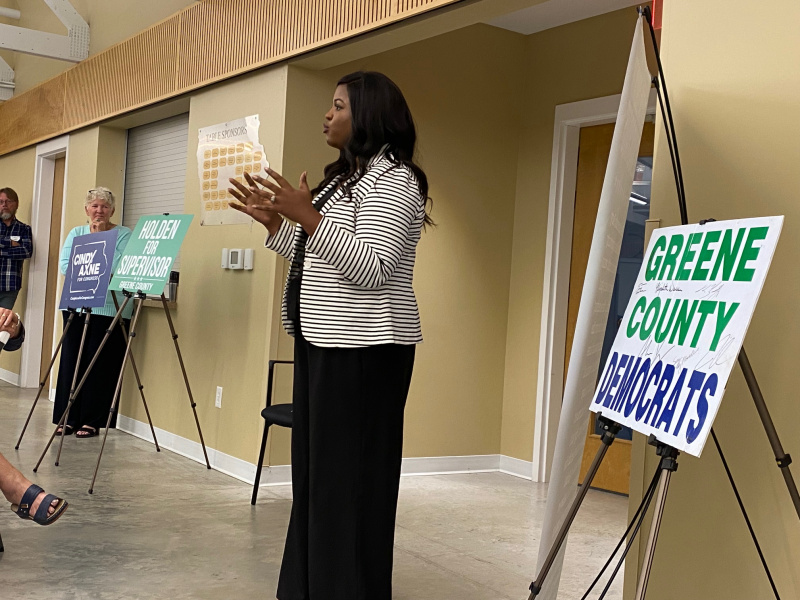 Chris Henning, chairperson of the Greene County Democrats, gave the welcome and administered a silent auction that was held with a variety of donated items and packages from around the area.

And get this, a Republican spoke, too!  Greene County Sheriff Jack Williams, who is in mid-term and thus not up for re-election this November, was on hand to ensure security.  There were no problems, and he was as pleasant and professional as he could be, even having a long chat with DeJear before dinner.  And, leading off the program after dinner, Sheriff Williams briefly spoke in favor of the bond issue that will be on the ballot in Greene County proposing to build a new jail, adjacent to the new law enforcement center in Jefferson.

The fundraiser, held at the beautiful Community Center in this old railroad town, had a theme of “All Aboard the Blue Express.”  I served as emcee, and was given the title of “Conductor.”  The catered dinner was from Grand Junction’s 30 Yard Line restaurant.  A number of party members volunteered as table servers.

You can learn more about the event in the photos and captions below here. 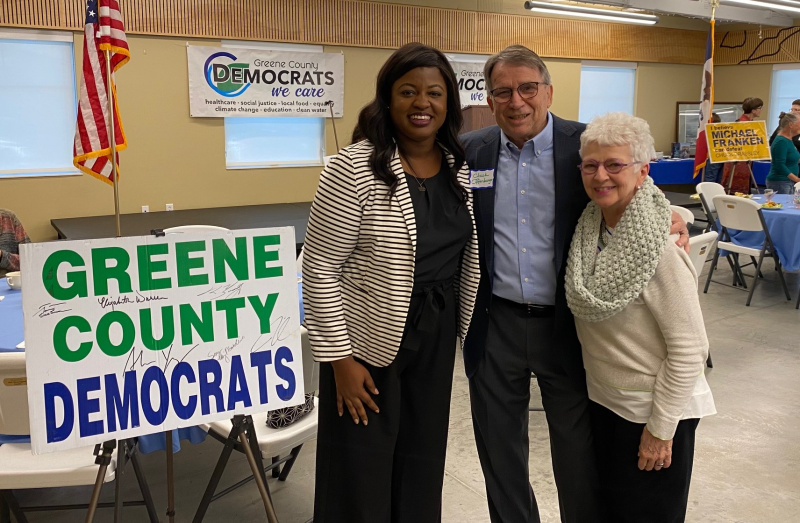 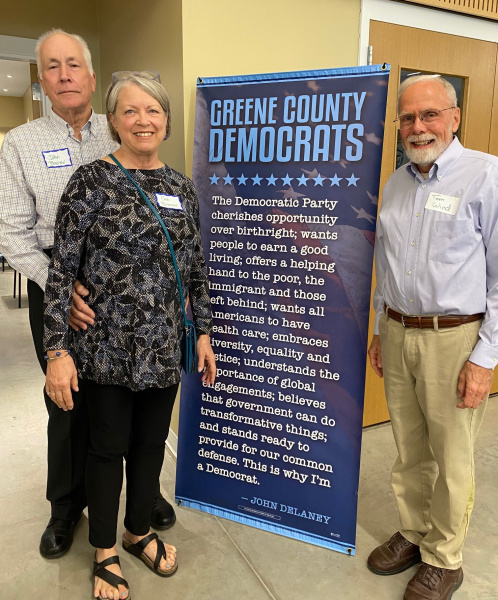 John and Ces Brunow, to the left, and Tom Wind are shown at a banner that carries a quote from former presidential candidate John Devaney, of Maryland on “Why I am a Democrat.”  Greene County Democrats have turned that into a kind of mission statement. 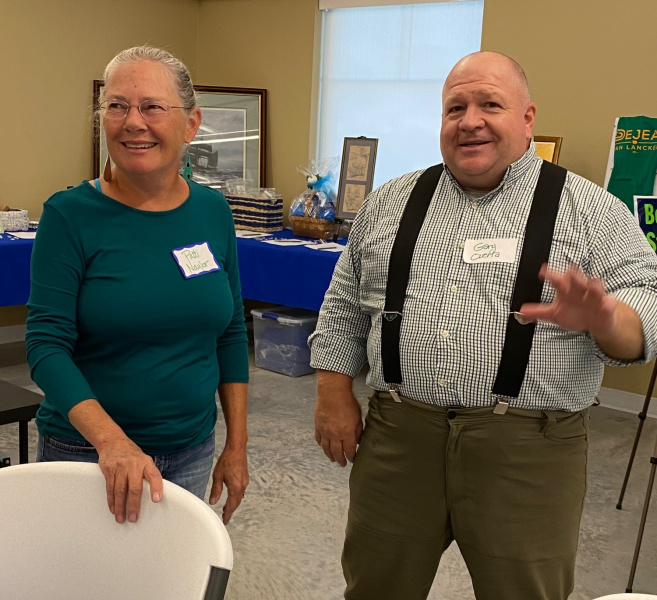 Patti Naylor, of rural Churdan, and Gary Overla, who lives between Dallas Center and Perry.  He is the Democrat seeking election to the Iowa House of Representatives from District 47, which includes all of Greene and Guthrie Counties, and parts of Dallas County. 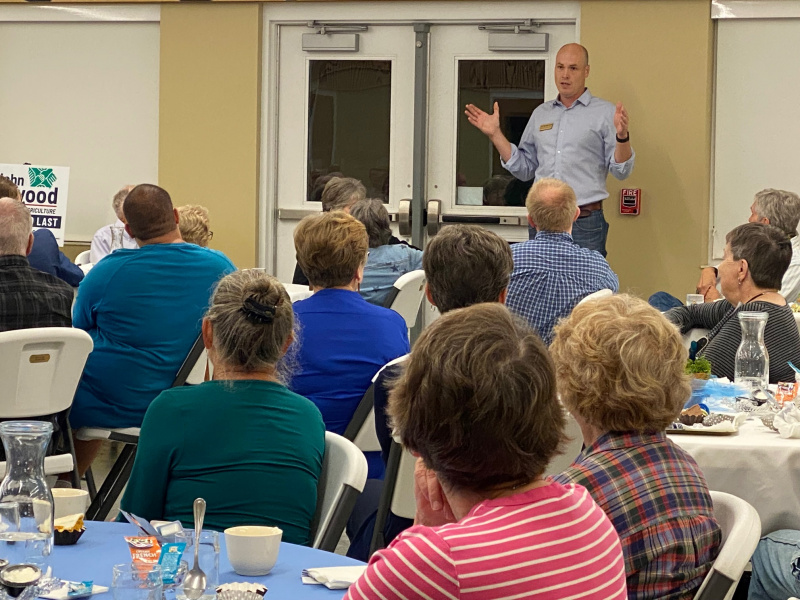 J.D. Scholten, who is running uncontested for the Iowa House of Representatives in his hometown of Sioux City, is also serving as political director for the U.S. Senate campaign of Michael Franken, and he spoke for Franken at the Greene County event.   Scholten said that this week’s news stories that Franken is said to have given an unwanted kiss last spring to a woman who had been fired as his campaign director, is an allegation that law enforcement has found to have no basis. “That wasn’t an attack on a woman,” Scholten said. “It was an attack by Republicans.” 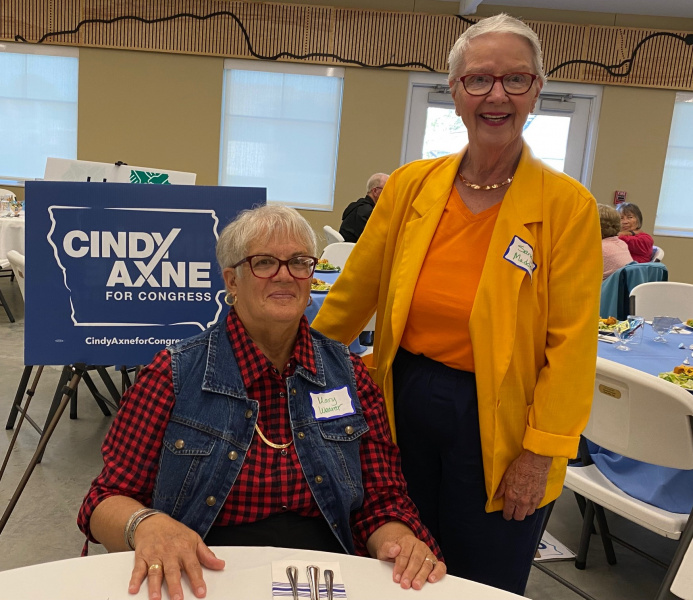 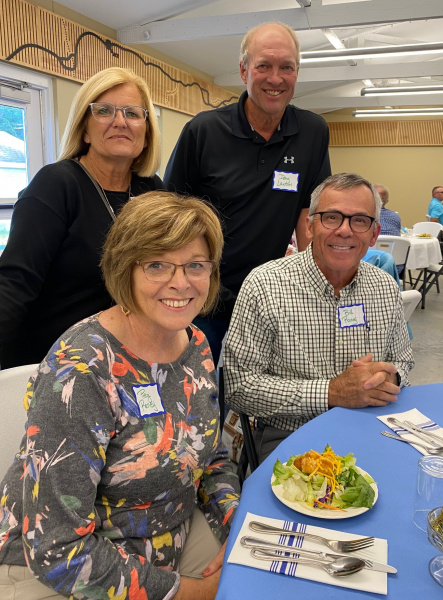 Karen and Doug Lawton (behind) shared a table with Peg and Bill Raney. 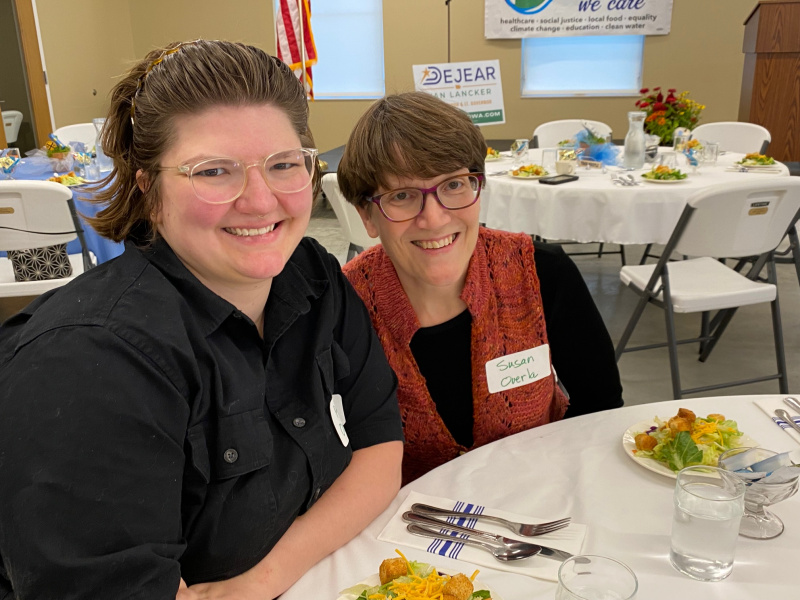 A.C. and Susan Overla are the daughter and wife of Iowa House candidate Gary Overla, who lives between Dallas Center and Perry and is a longtime teacher and coach at Perry High School. 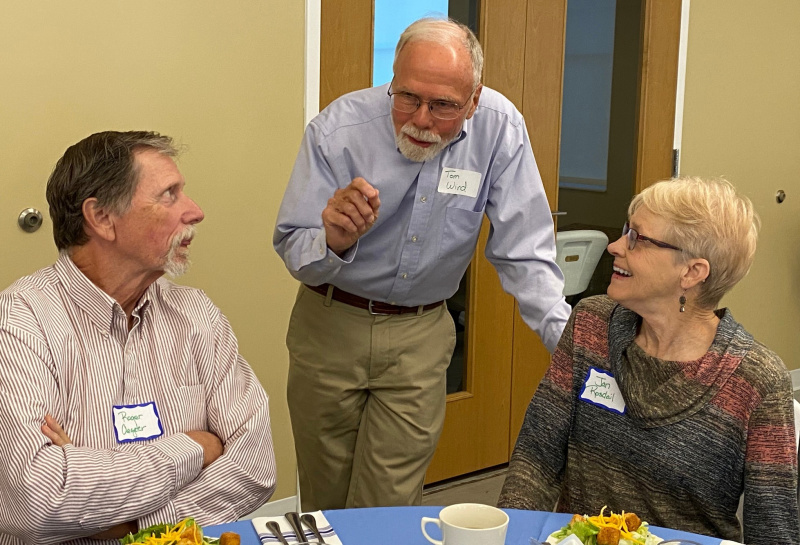 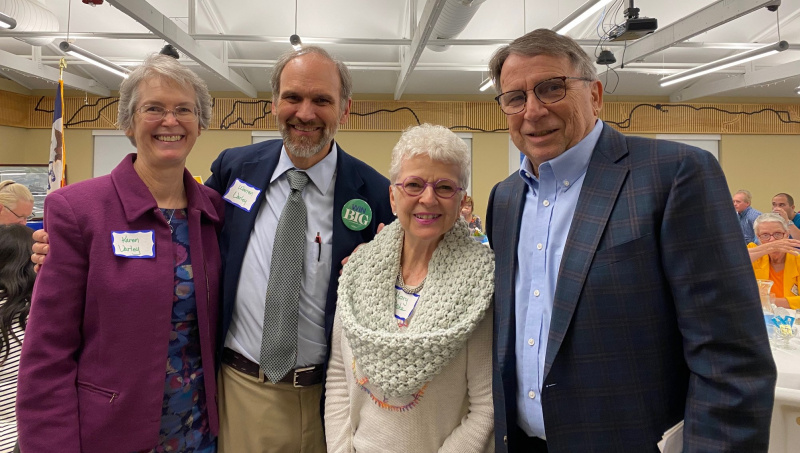 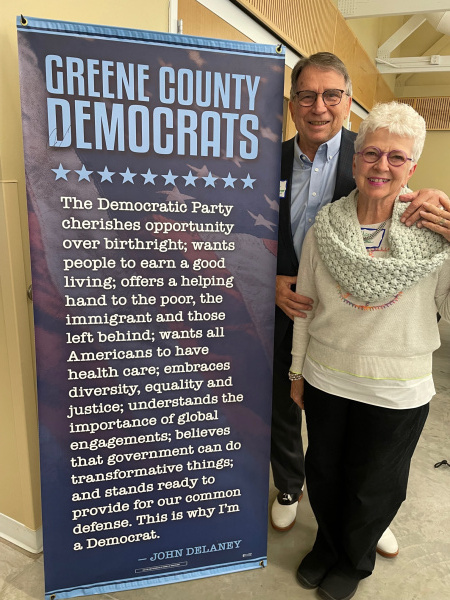 Another look at that mission statement of the Greene County Democrats, with Chuck Offenburger and Mary Riche.

You can comment on these photos and story by using the handy form below, or you can write directly to our team by email at maryriche@gmail.com or chuck@offenburger.com.

One thought on “Greene Co. Democrats rally in Grand Junction, and here’s the story in 11 photos & a few words.”