COOPER, Iowa, Dec. 13, 2013 — So we were at Deal’s Orchard and Tree Farm, just west of Jefferson, where Carla Offenburger and I were cutting down our own Christmas tree for this season.  Co-owner Jerald Deal and his assistant Camron Roath were waiting to shake out the loose needles, drill the trunk, put it in our tree stand and then “net it up” for the trip back to our farmhouse.

When Deal started up his chain saw to square off the rough, angled cut I’d made on the bottom of the trunk, it threw me right into a flashback. 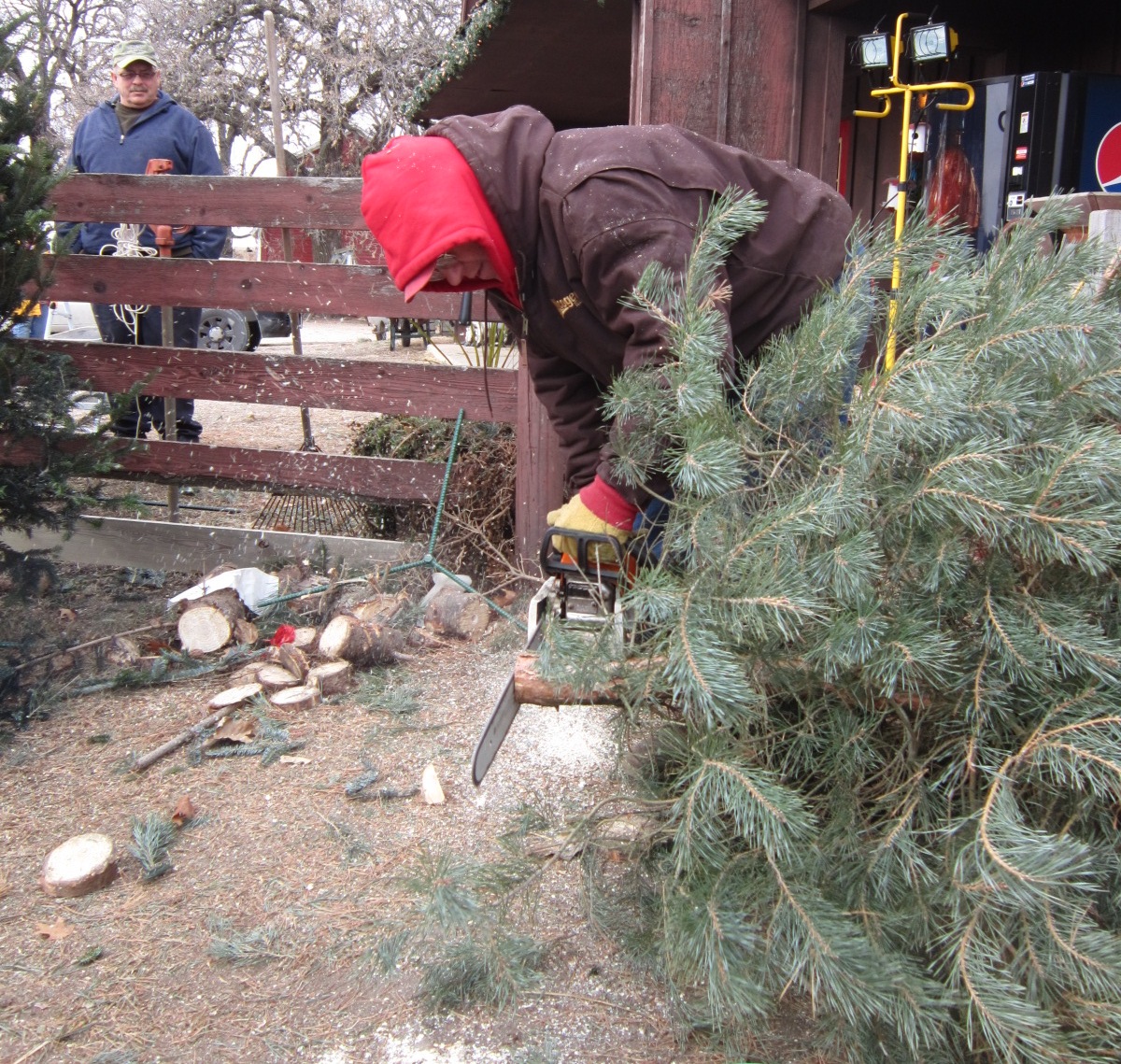 A good Christmas tree farm owner like Jerald Deal can straighten out a lot of mistakes that his customers make when they are out in the trees cutting down the one they like.

You see, I didn’t always buy my Christmas trees at official farms of the Iowa Christmas Tree Growers Association.  I think it was 25 years ago, the Christmas of 1988, when I had my conversion experience.  I was living in Des Moines then and, like a lot of city people, I’d just go down to a temporary Christmas tree sales lot, operated by the Boy Scouts or some other charitable group over on Merle Hay Road, and I’d buy one of their trees which had been trucked in from Minnesota, Wisconsin or some place else up north.  I’d had a couple different little steel stands, cheap ones, that never worked as well as I wanted in making the trees stand up straight.

But that tree in ’88 was the worst ever.  I didn’t buy it until just a few days before Christmas, so it wasn’t exactly the pick of the litter.  And the night I bought it, the temperature was near zero, the wind was blowing and I was in no mood for giving it close scrutiny.  I just grabbed one of the few remaining trees, paid too much for it, threw it in the trunk and drove directly home.  I hauled it up to the living room, put it in the stand and, no matter what adjustments I made, it was tilted a good 15 degrees west.  I tried to spin it around, but it stayed tilted.  So I started adding copies of Sports Illustrated magazines under one leg, and it was worse than ever.

I should add right here that, on that Christmas, I was single.  And I was still a drinking man.

So no one was there to argue when I decided to go down to the garage, get the chain saw and bring it up to straighten out that tree — right there in the living room.  Well, actually, my son Andrew, then about 12 years old, was there, but he thought it seemed like a neat idea. And he wasn’t drinking at all.

Sawdust and wood chips flew all over the living room, but I did get the tree to stand up straight.  It was just a lot shorter by the time my chain sawing was done.

I wrote one of my Des Moines Register columns about that experience, and I headlined it, “The Christmas tree from Hell.”

A day or two later, I received a letter from Lee Aldrich, owner of the Aldrich Tree Farm south of Belmond in north central Iowa. “You, of all people,” he began, referring to my status then as chief defender of all things Iowan, “why are you not buying your Christmas tree from a member farm of the Iowa Christmas Tree Growers Association?  If you would, you’d know that we sell these magic stands that make all trees stand up perfectly straight.  Your tree will be fresh, not a bit brittle, it will make your house smell great and it will last longer. You sure won’t have any more ‘Christmas trees from Hell.’ ”

He sent along a beautiful wreath he and his wife Lynne had made from everygreen they’d grown on their farm.

For the next 15 years, we Offenburgers would make a trip to Aldrich Tree Farm sometime between Thanksgiving and Christmas to buy our tree.

On our first trip there, we bought the magic stand.  We’re still using it.

By Christmas of 2004, when we were living here in Greene County, we discovered that Deal’s Orchard and Tree Farm is a member of the Iowa Christmas Tree Growers Association.  So we called Aldriches, told them we were going to shop locally with Jerald and Cindy Deal, and they blessed our switcheroo.

We’ve noticed the Christmas trees seem to be better every year, or maybe it’s that we appreciate them more the older we get.  And I haven’t used a chain saw in the living room since ’88. 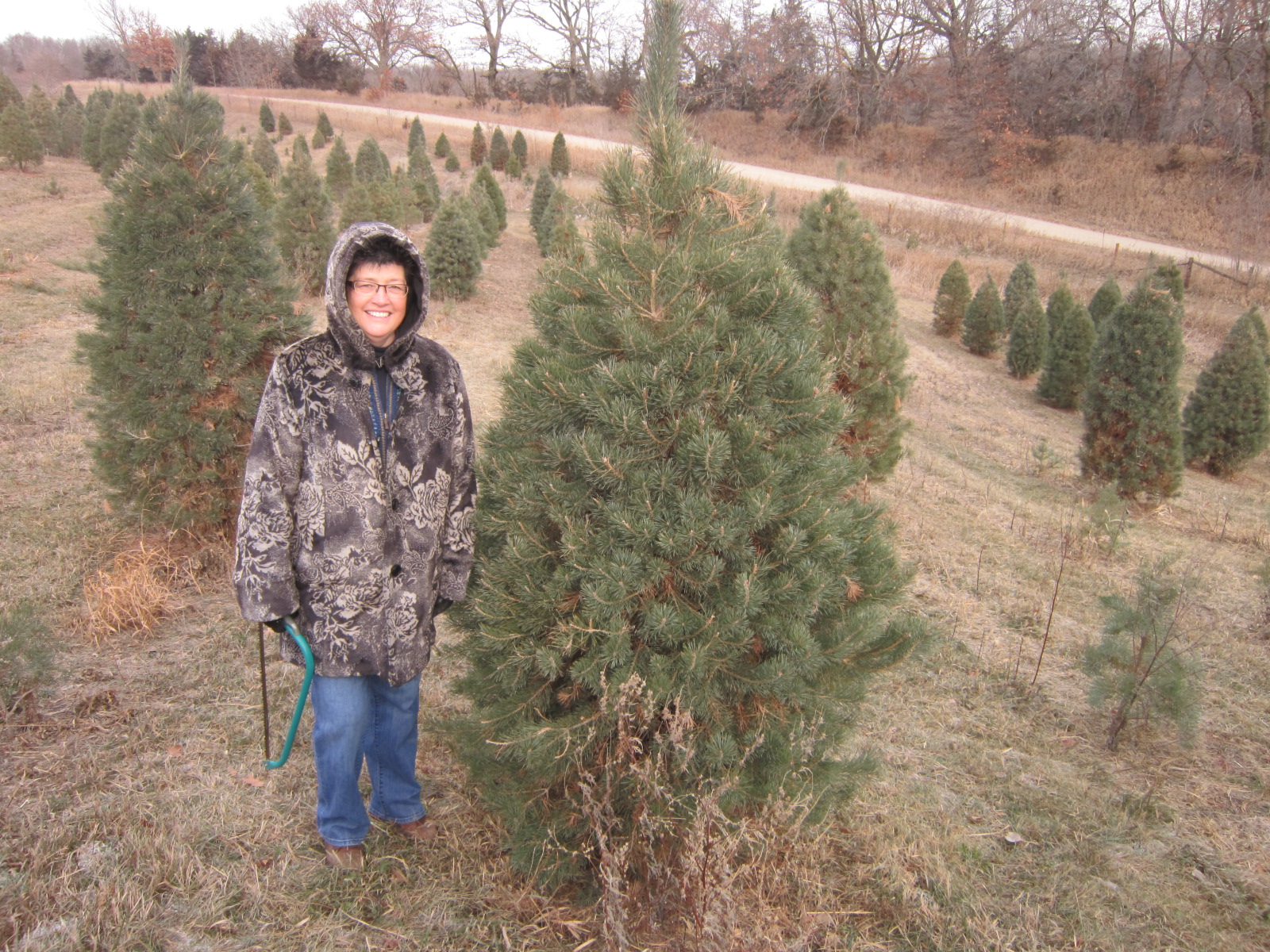 Carla Offenburger with the tree she picked out at Deal’s Orchard and Tree Farm west of Jefferson. 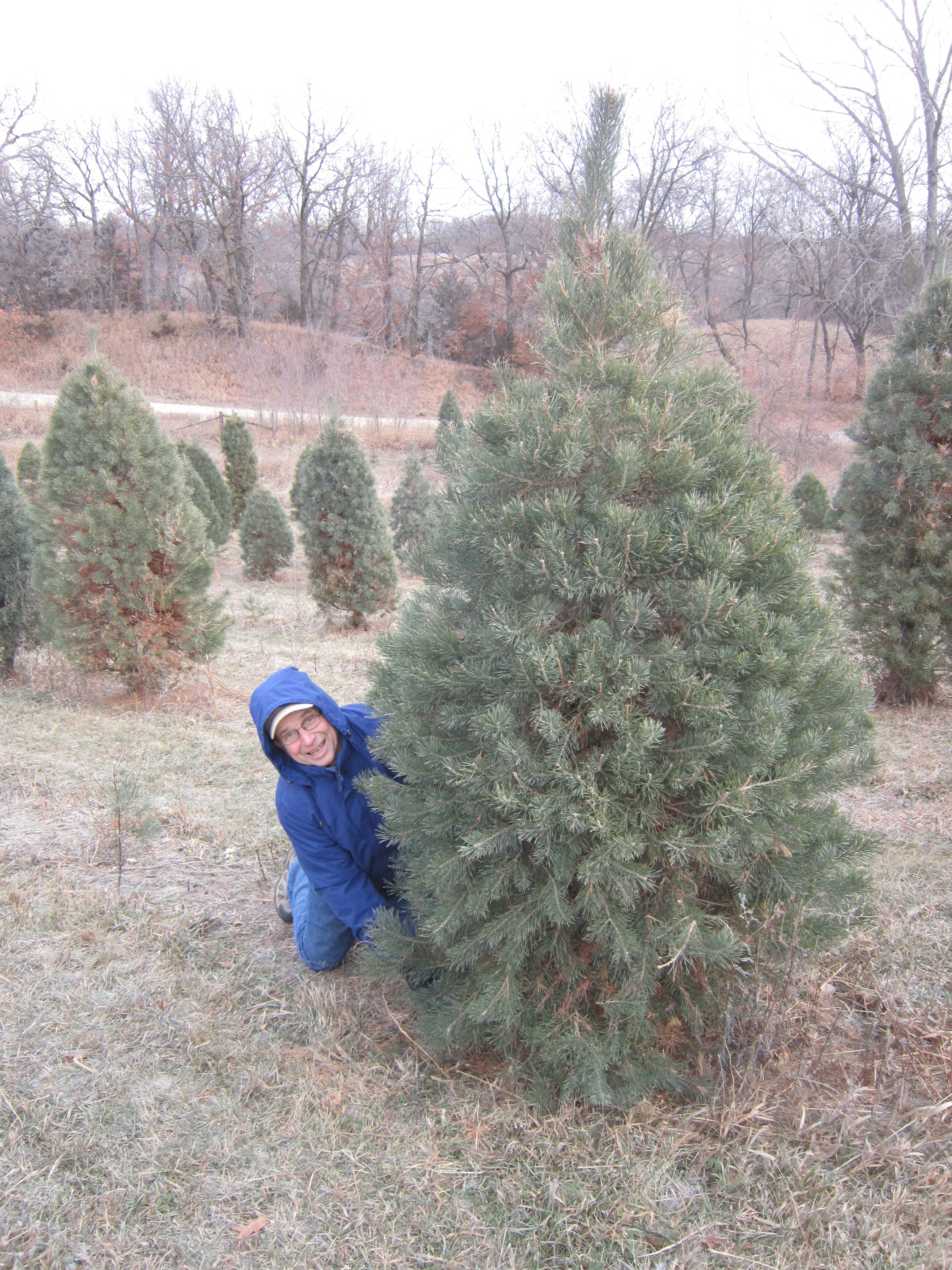 Chuck Offenburger takes last whacks at the trunk of the tree with the rip saw Deal’s Tree Farm provides. 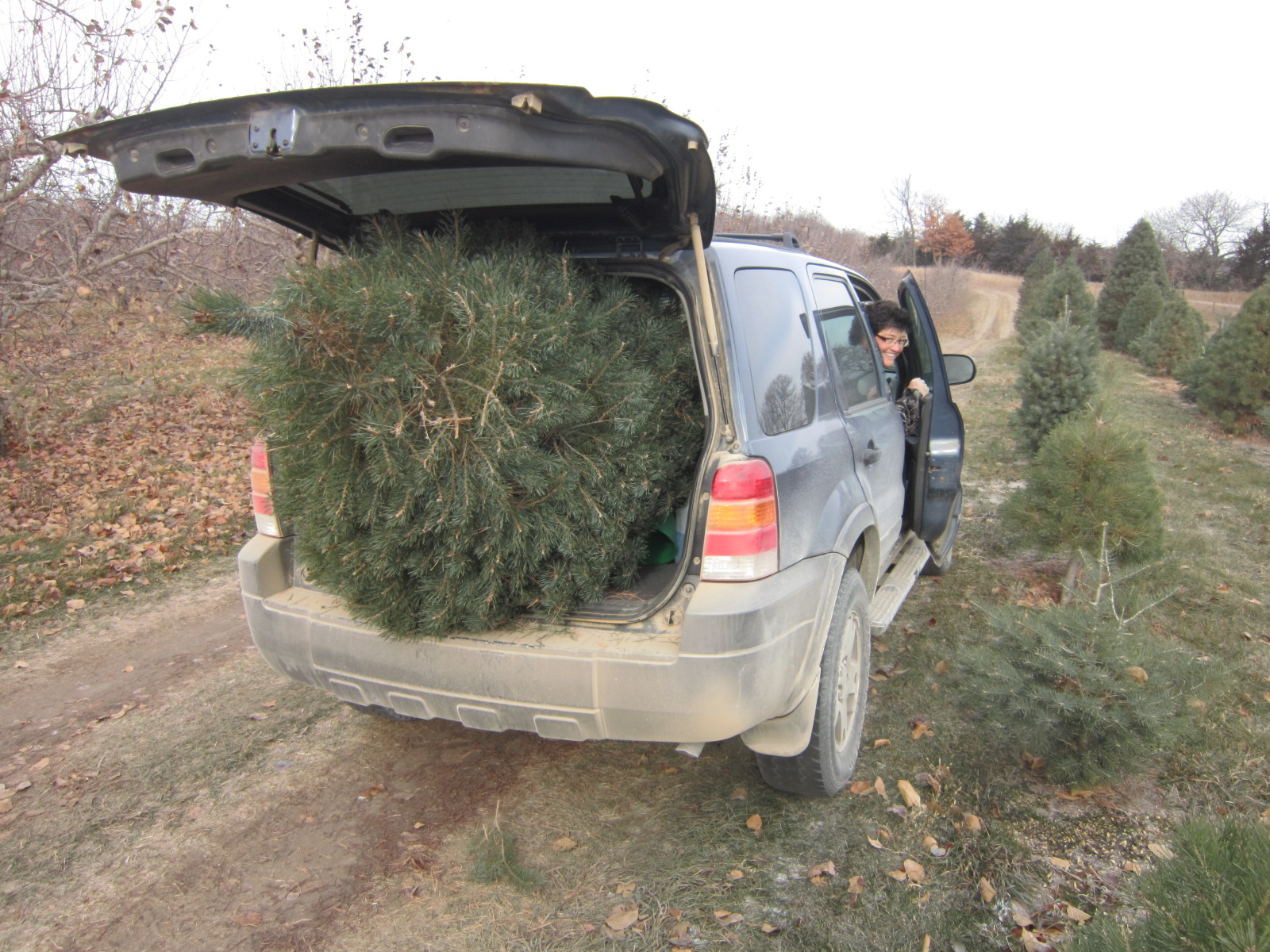 The tree, a bushy one, filled up the back of the truck when we were ready to haul it from the field to Deal’s headquarters. 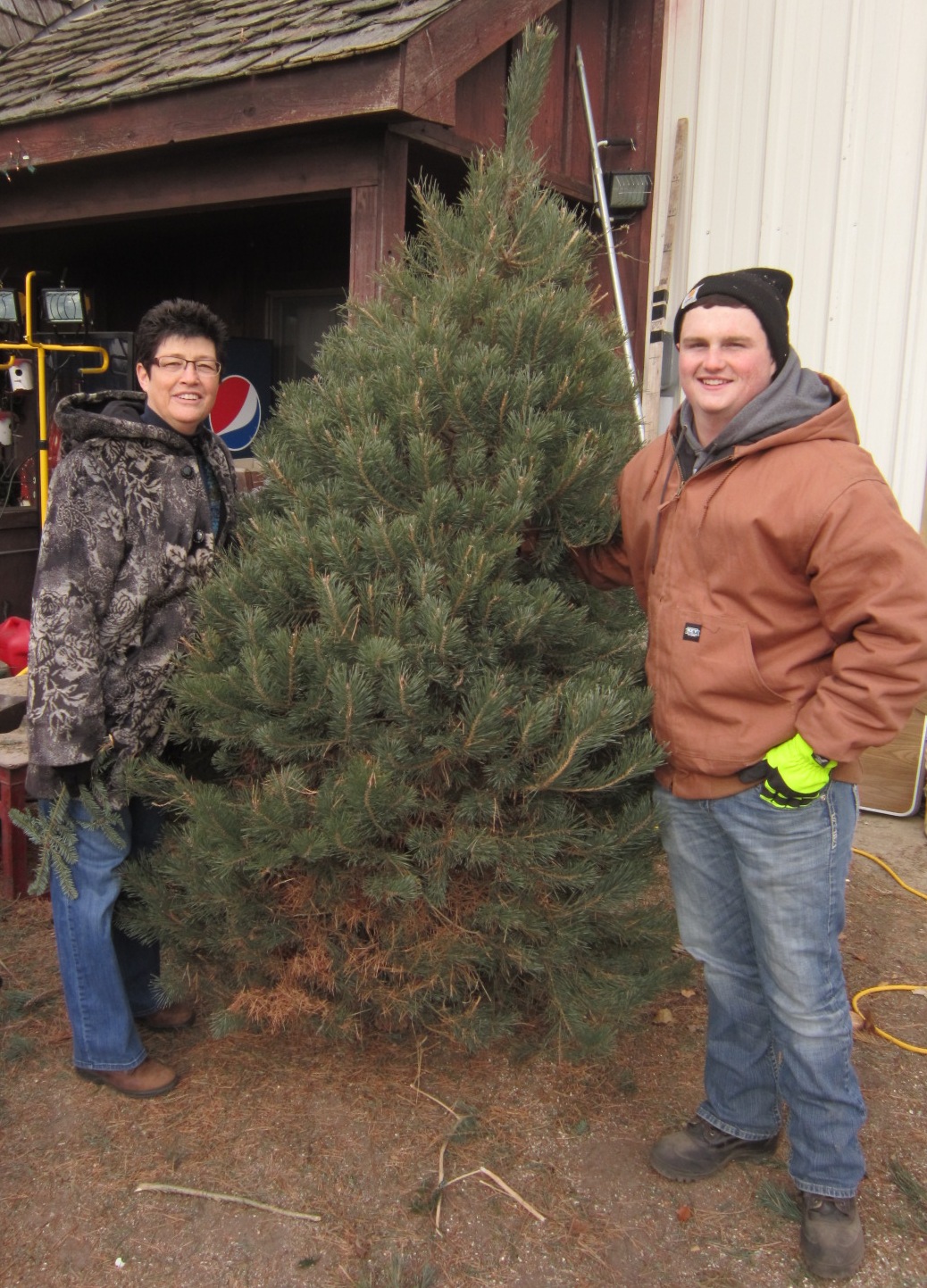 Carla turns the tree over to Deal’s assistant Camron Roath. 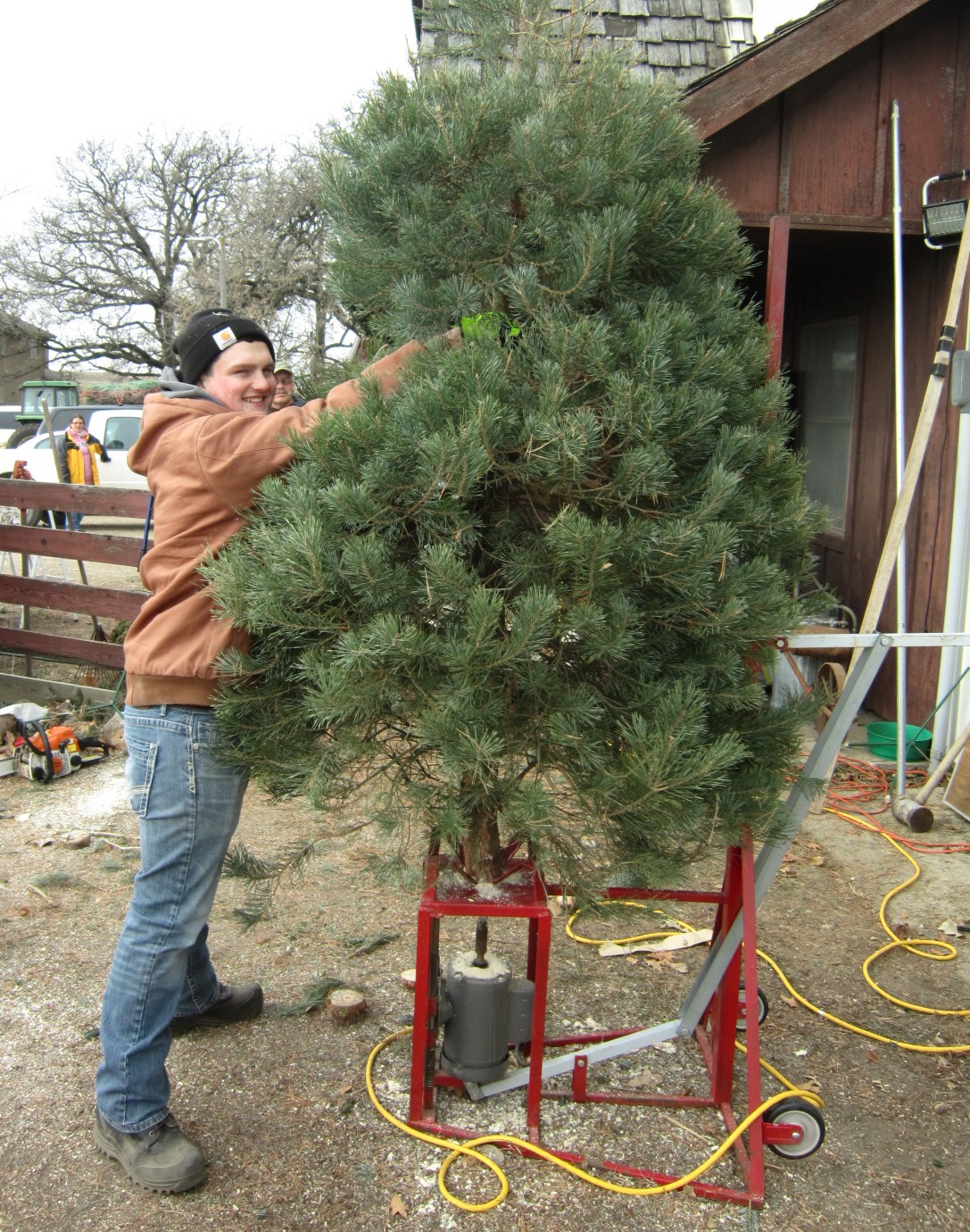 Camron steadies the tree while the trunk is drilled. 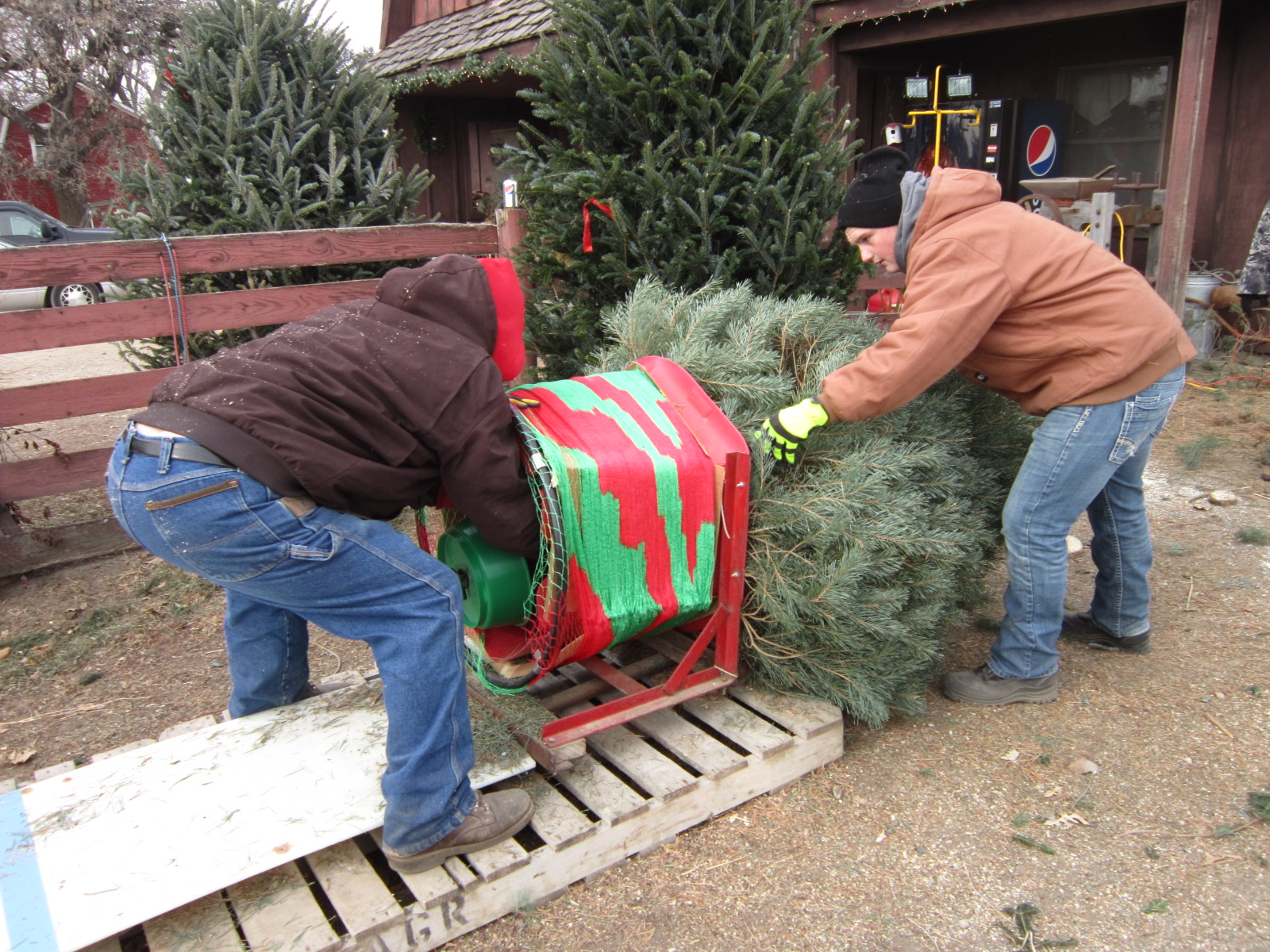 Jerald and Camron are shown here running the tree through the netting machine.  You can see the magic tree stand we use that makes all trees stand up straight after their trunks are properly drilled. 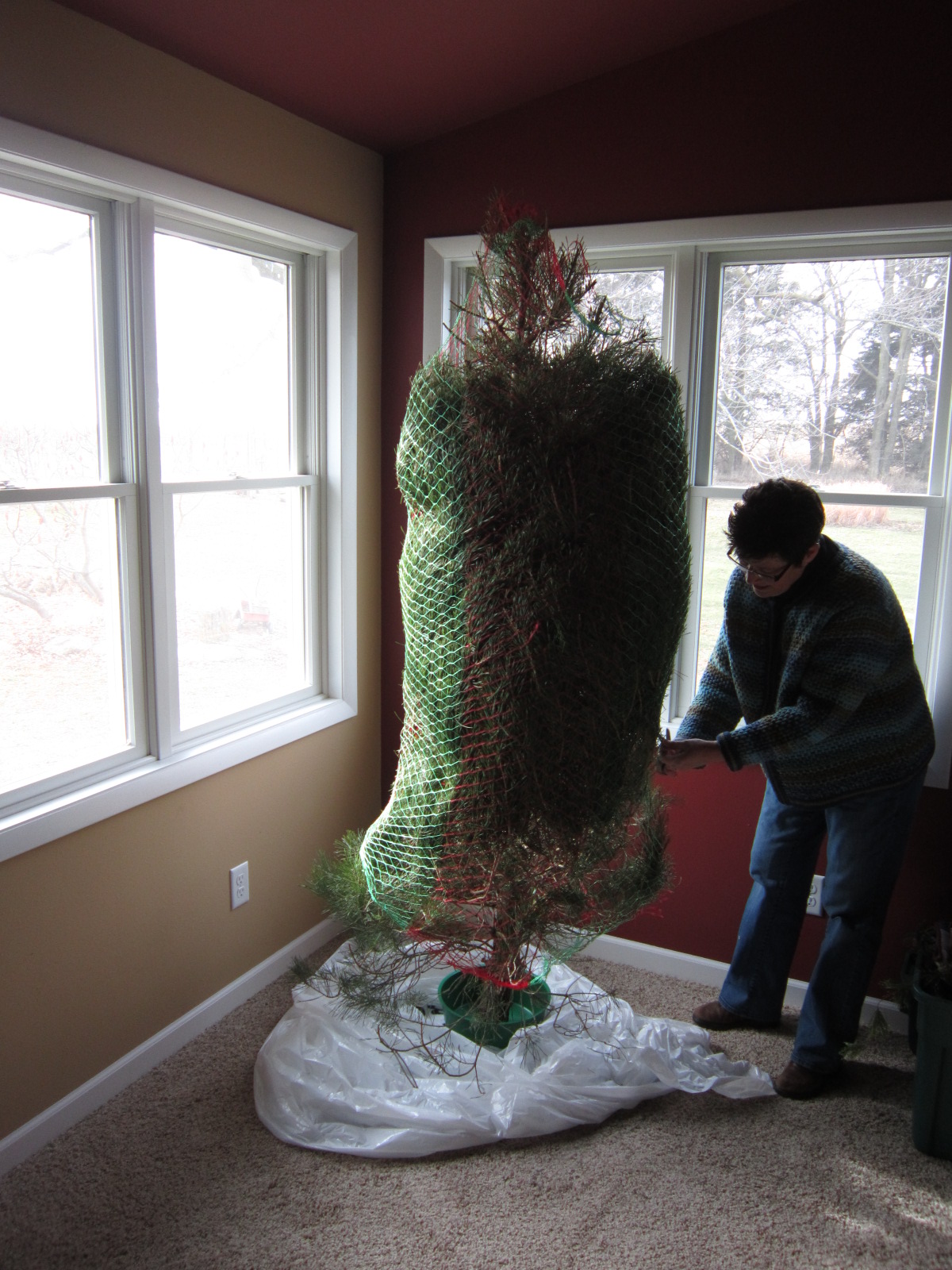 Here’s the netted tree after we got it positioned in the corner of our new room at the farmhouse. 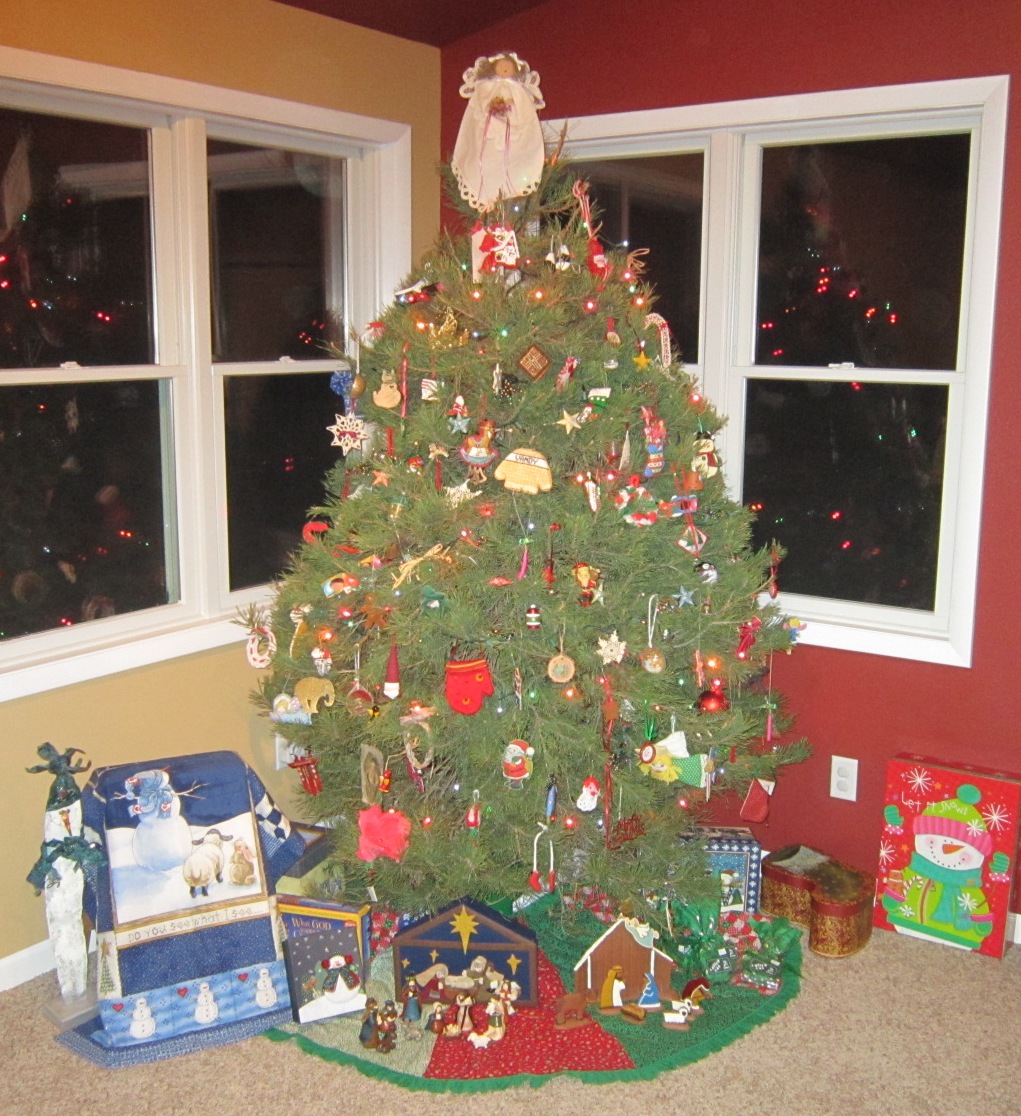 The tree after Carla had finished decorating it.

4 thoughts on “FEATURE PHOTOS: There haven’t been any “Christmas trees from Hell” at our place for the past 25 years!”