JEFFERSON, Iowa, Dec. 24, 2013 — It seems like one of those Christmases when we’ve seen nearly everyone we know, at one holiday gathering or another.  (You’ll see that in the gallery here of 25 of our favorite photos from this season.) That’s the way it usually is when you live in or near a small town, like we do. You go to the official opening of the season when the lights go on in the rotunda of the county courthouse.  You see the kids in their church and school programs.  You see several hundred turn out for the Nativity Festival & Concert sponsored by Habitat for Humanity, raising more than $7,000 for projects here in Greene County.  You do your traditional parties, large and small.  You attend some of the most inspiring church services of the year.

It’s a time of year when you see so many people, doing extra things to entertain, help and serve others.  Volunteer bell ringers for the Salvation Army.  Musicians doubling their practice and performance schedules.  Merchants extending their hours to accommodate shoppers.  “Secret Santas.”  People buying and donating grocery carts of food.

And here come Dean and Lois McAtee, now 81 and 77, suiting up a dozen to 15 times as Santa and Mrs. Claus.  Dean has been playing Santa 30 years or longer, and the last 15 years, he’s devoted most of December to doing so.  Lois is in her fourth or fifth year as Mrs. Santa.  They’re very convincing in their roles.  “It’s very rewarding,” said Lois. “I’d sure hate to give it up.”  Both do it for the kids — and the parents.  “The best part is probably the kids,” said Dean. “I love it when some little ones comes up and you know they probably have a list of 10 or 12 toys they’ve talked about wanting.  But then they crawl up on  your lap, their eyes open real wide, and a lot of times they totally forget that they wanted anything.  They just sit there sort of spellbound.  That’s nice, but sometimes it’s even better right then to look out at their parents.  You see smiles in their eyes, real happiness.  We don’t see enough of that in people nowadays.

Now, we celebrate some of what we’ve been seeing, in the photos below. 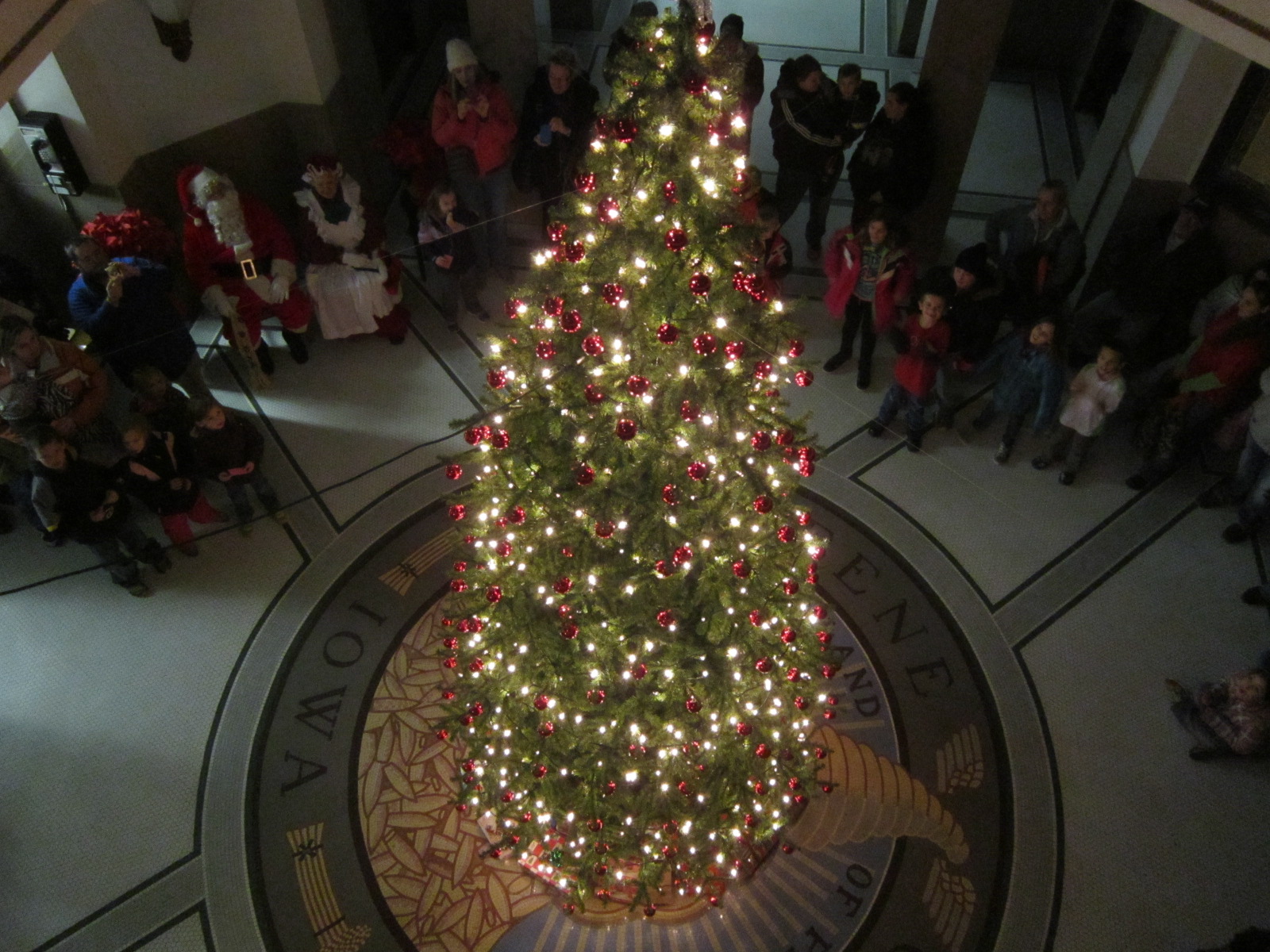 The “official” opening of the holiday season came in early December, when in the twilight one late afternoon, the lights on the towering tree standing in the darkened rotunda were switched on.  Children had gathered with Santa and Mrs. Clause for carols by the bell choir of the First United Methodist Church, the reading of “Twas the Night Before Christmas” by teacher Dave Bohnet and then the lighting. 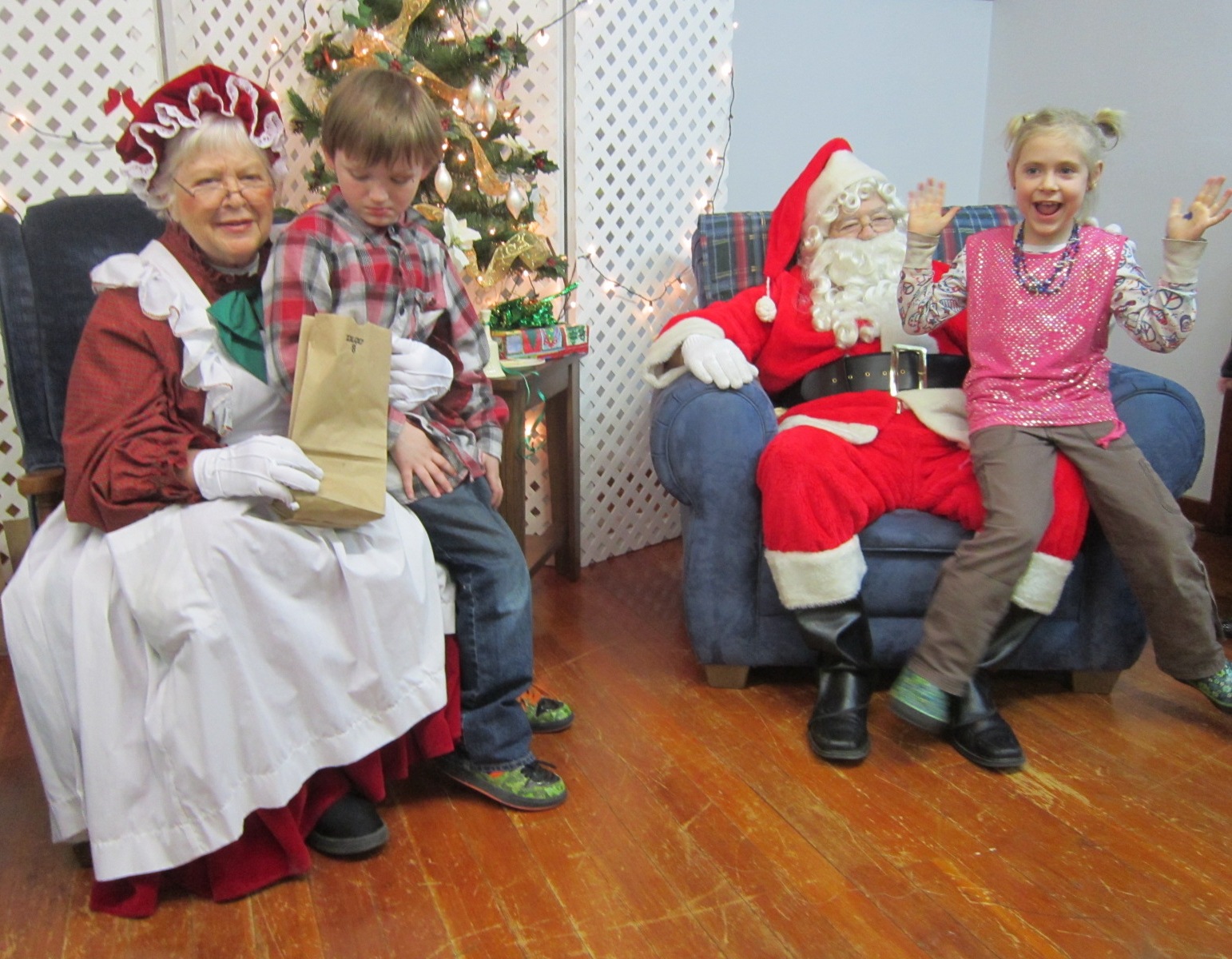 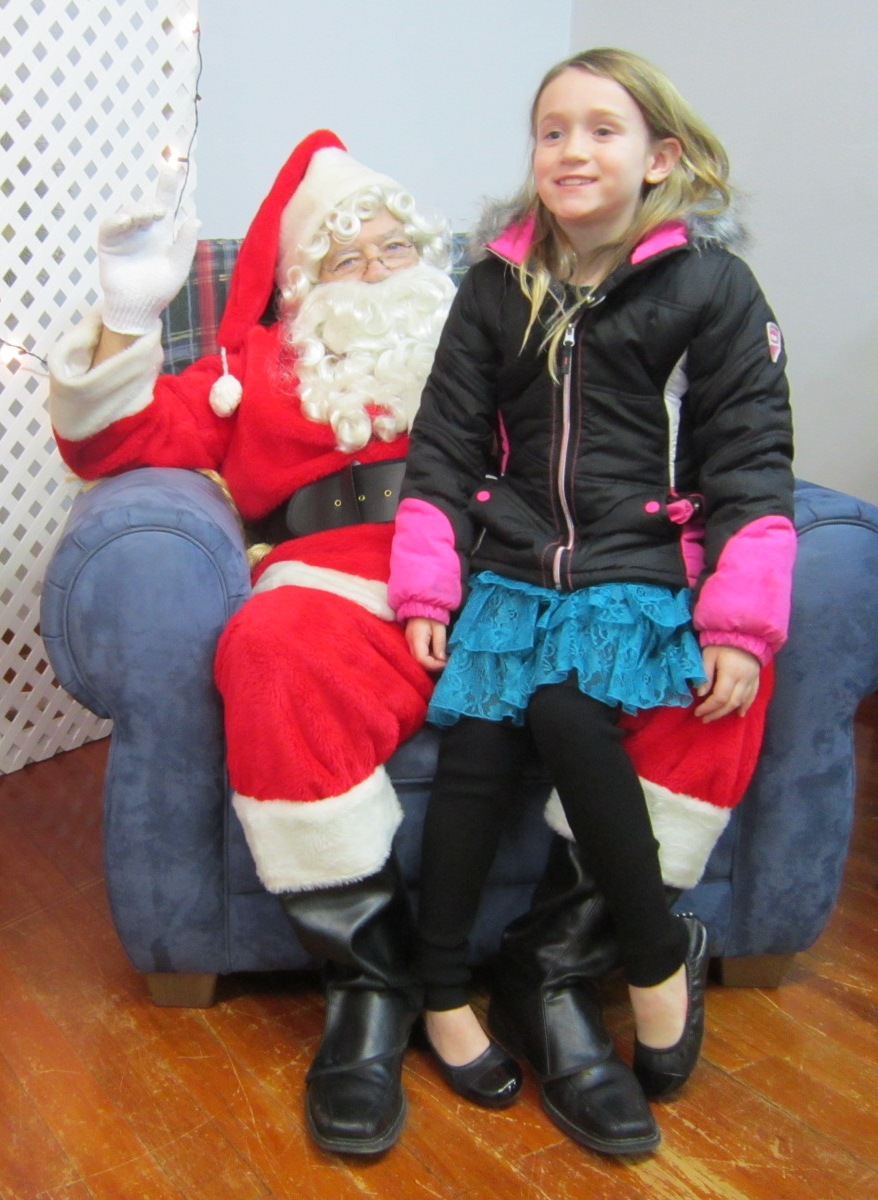 Ashlyn Hammond gets her turn with Santa. 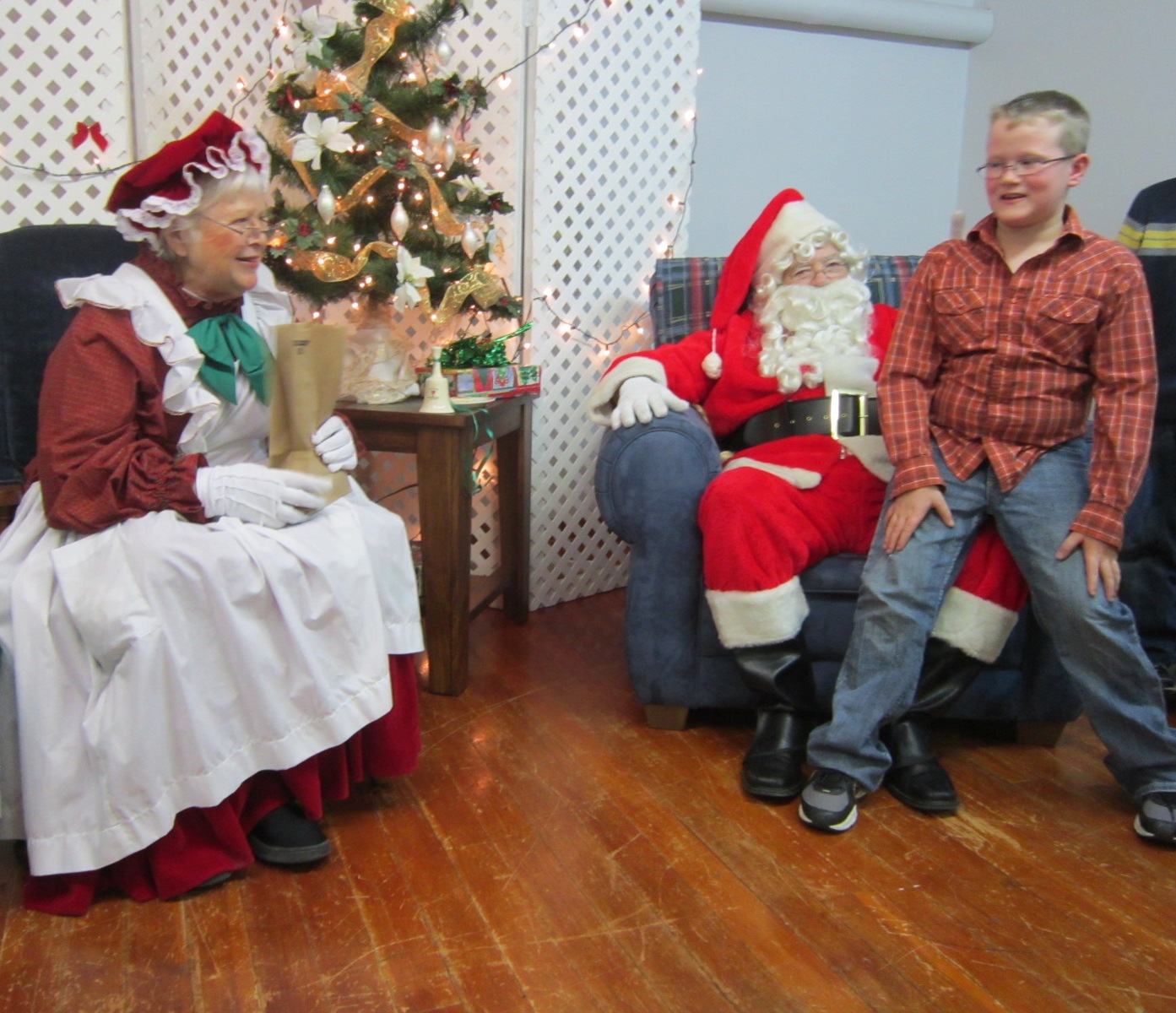 Josh Jensen and the Clauses. 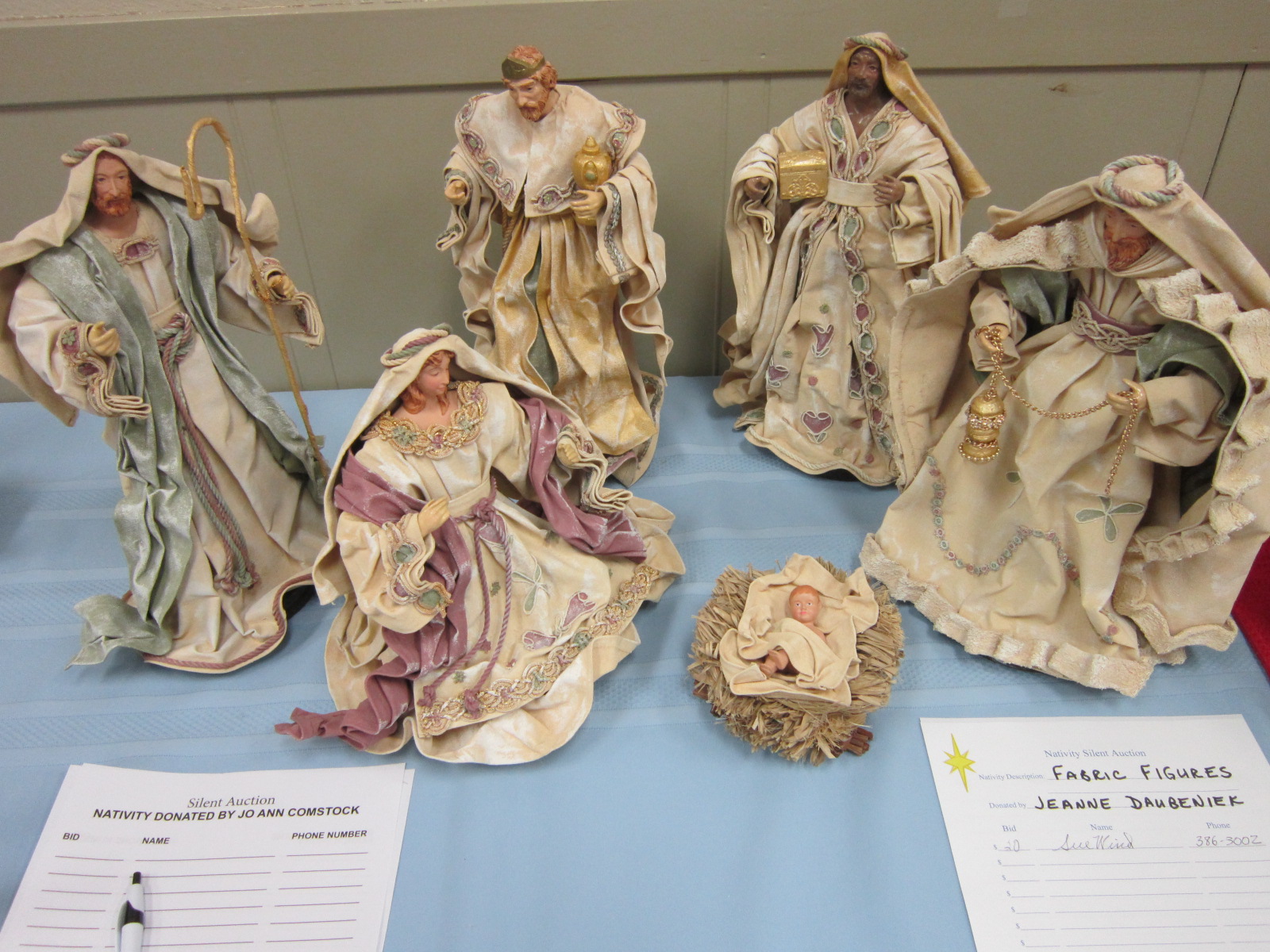 A Nativity set with 8-inch figures made of fabric, was one of the most beautiful of 45 that were displayed at the Nativity Festival & Concert put on as a benefit for Habitat for Humanity projects in Greene County.  The event was held Sunday, Dec.8, at St. Joseph Catholic Church and Parish Center in Jefferson. 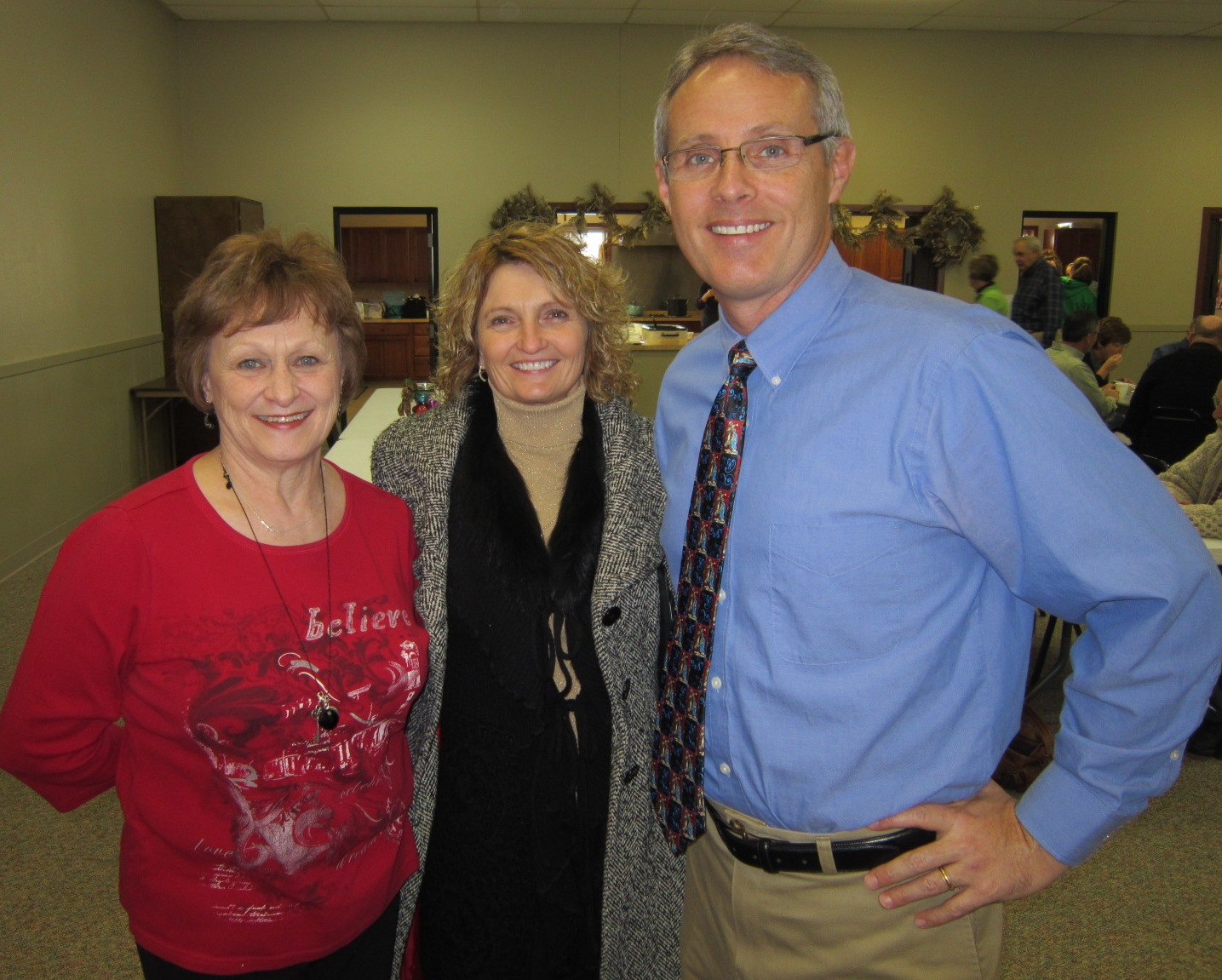 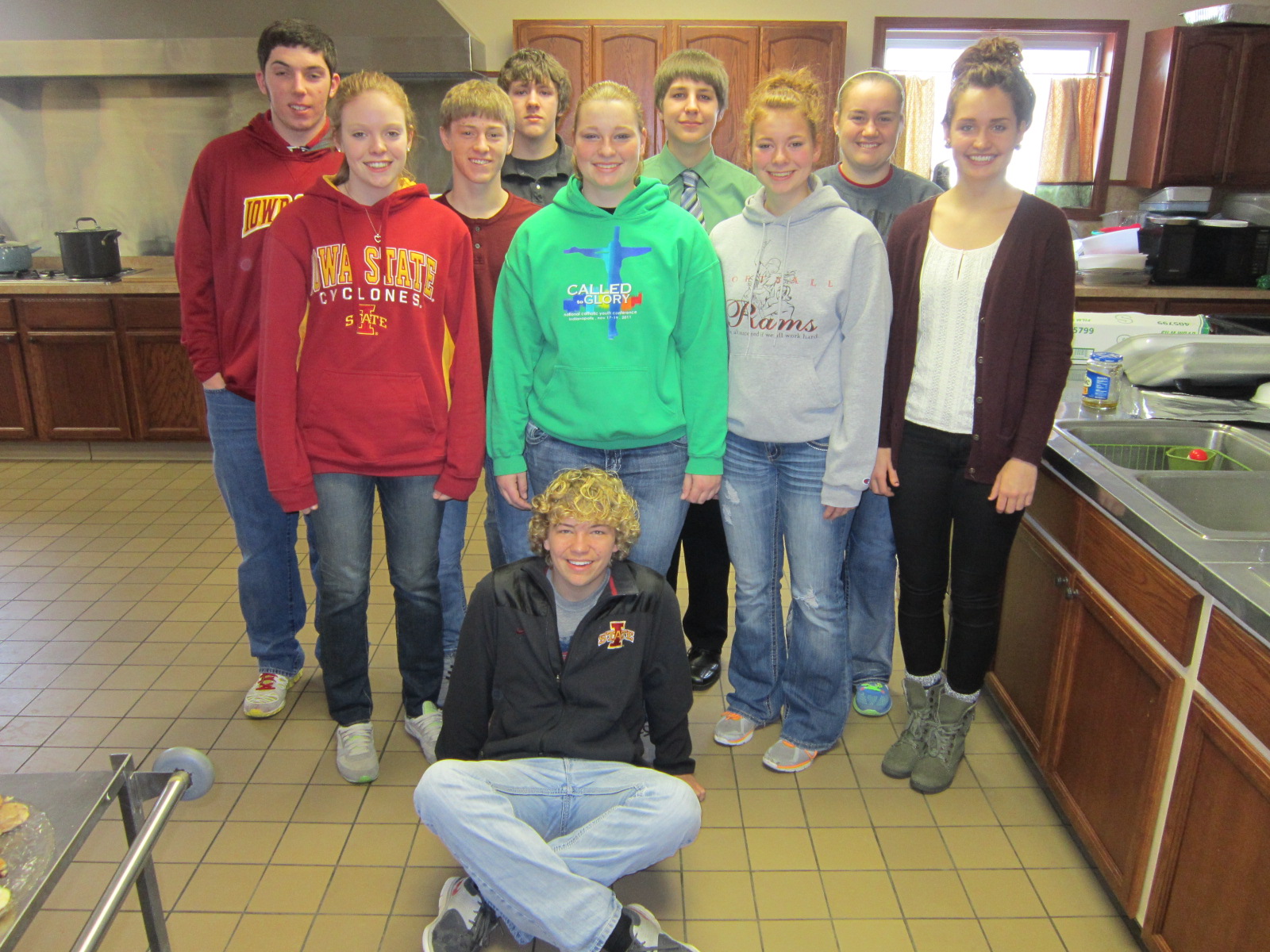 Students from Greene County High School’s Interact Club were servers for the soup luncheon at the Parish Center of St. Joseph Catholic Church. 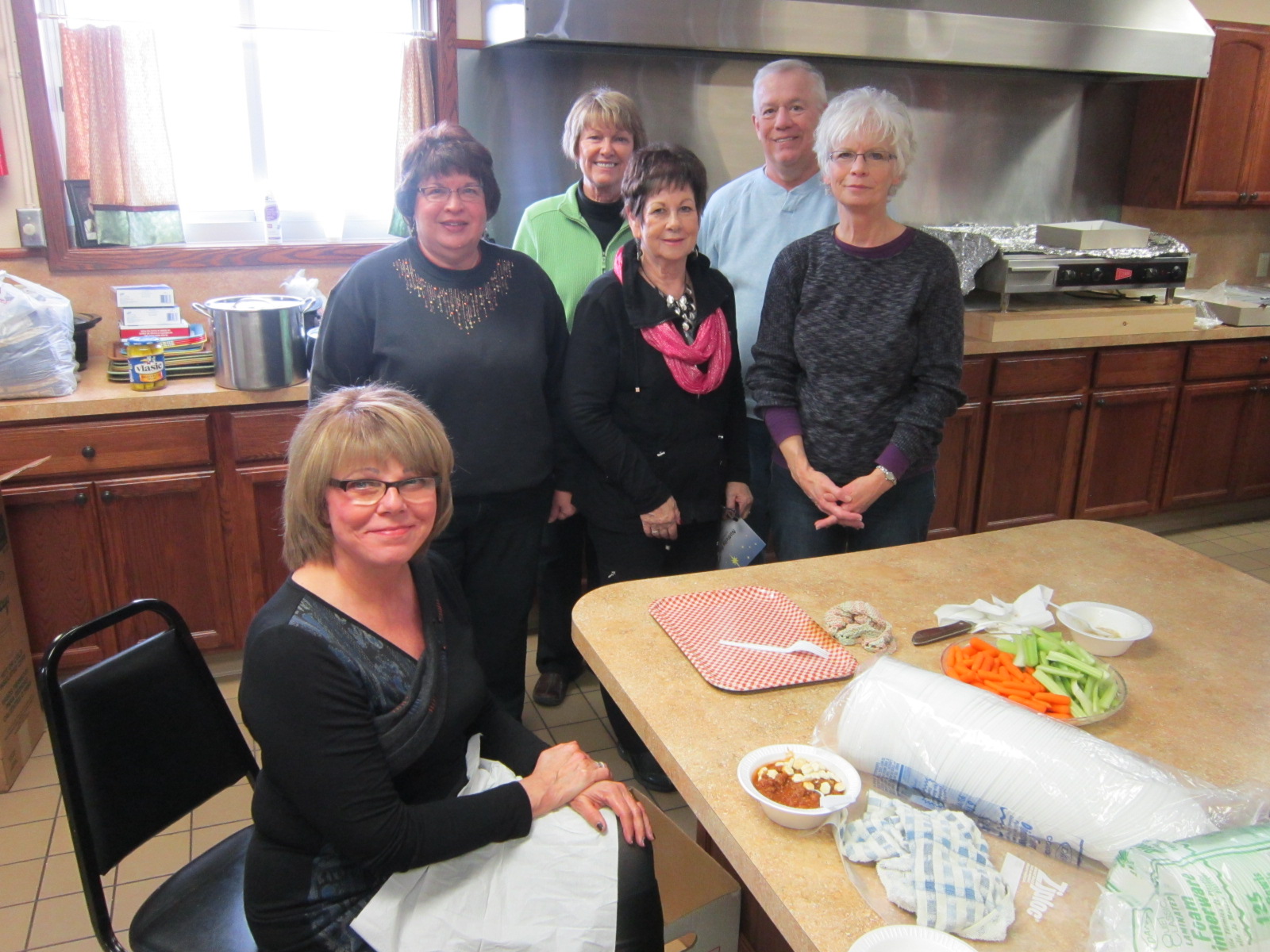 Volunteers working the kitchen during the Nativity Festival’s soup luncheon. 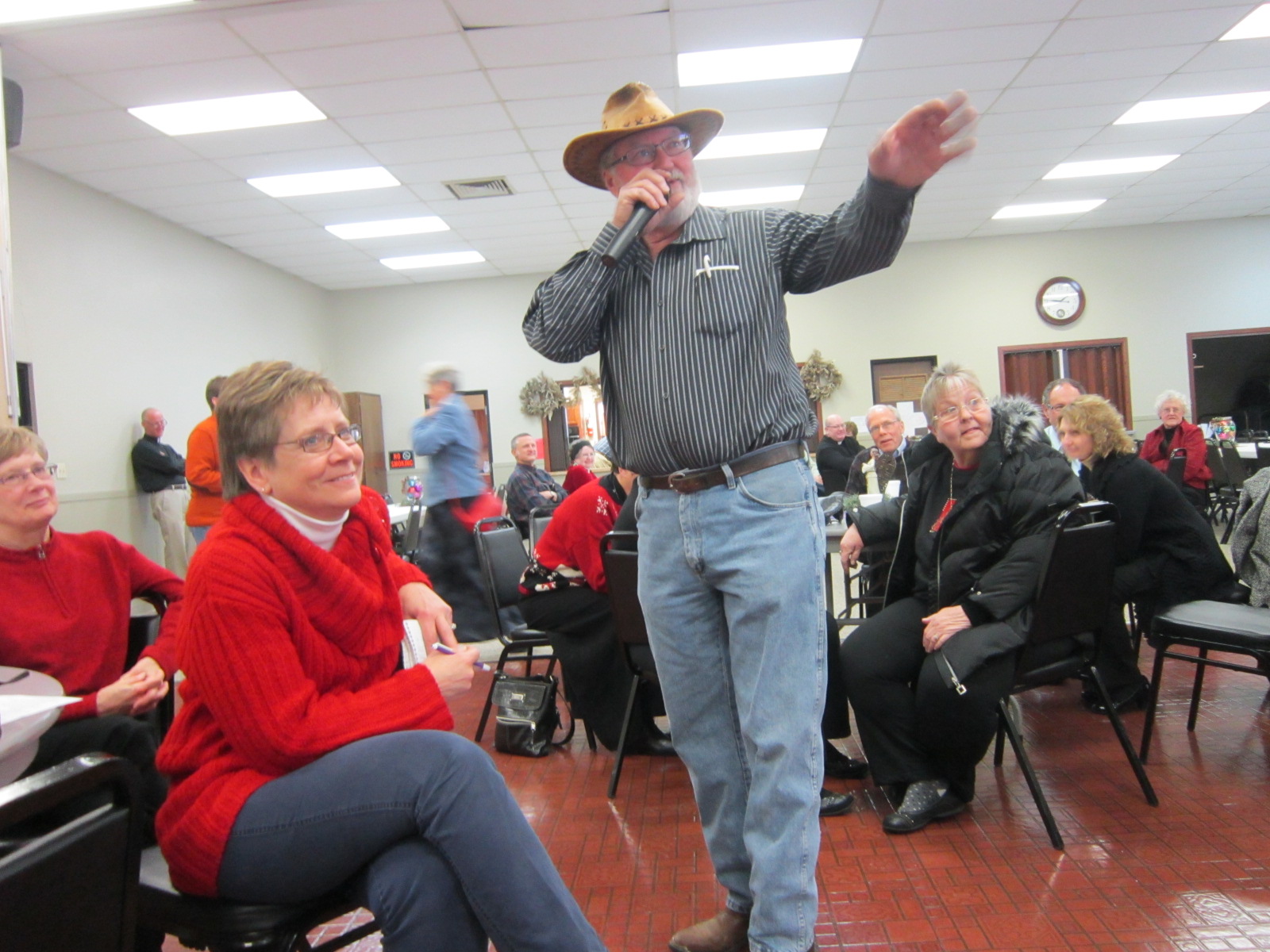 Auctioneer Dale Higgins is shown here starting the pie auction, which featured pies made by about 20 of Greene County’s best bakers — and they were sold for a total of more than $2,000 in donations to Habitat.  Tori Riley, sitting in the foreground, was enjoying Higgins’ lively banter. 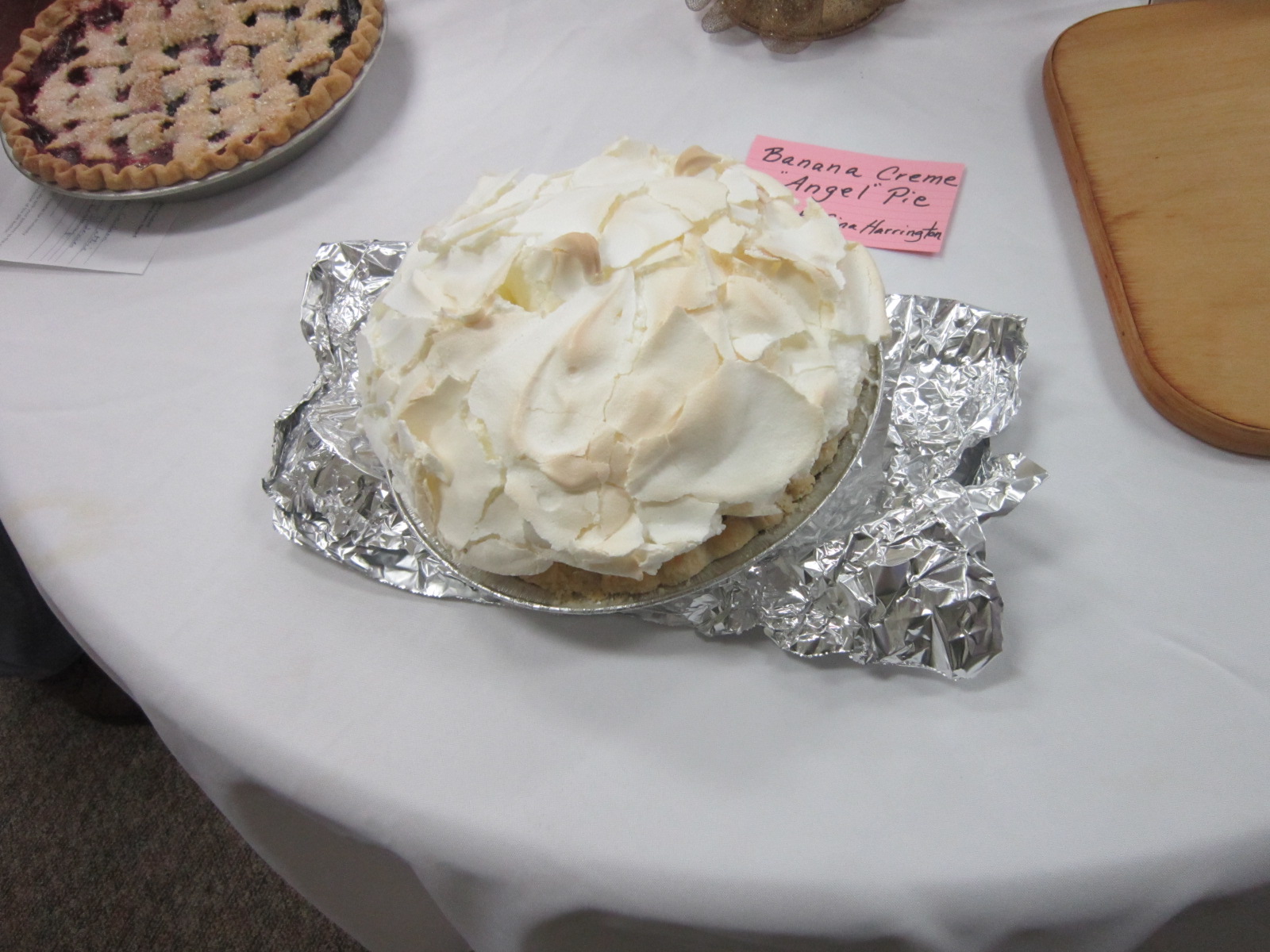 Gina Harrington’s “banana creme angel pie,” with the lightest meringue ever, brought $275 as the top pie in the auction. 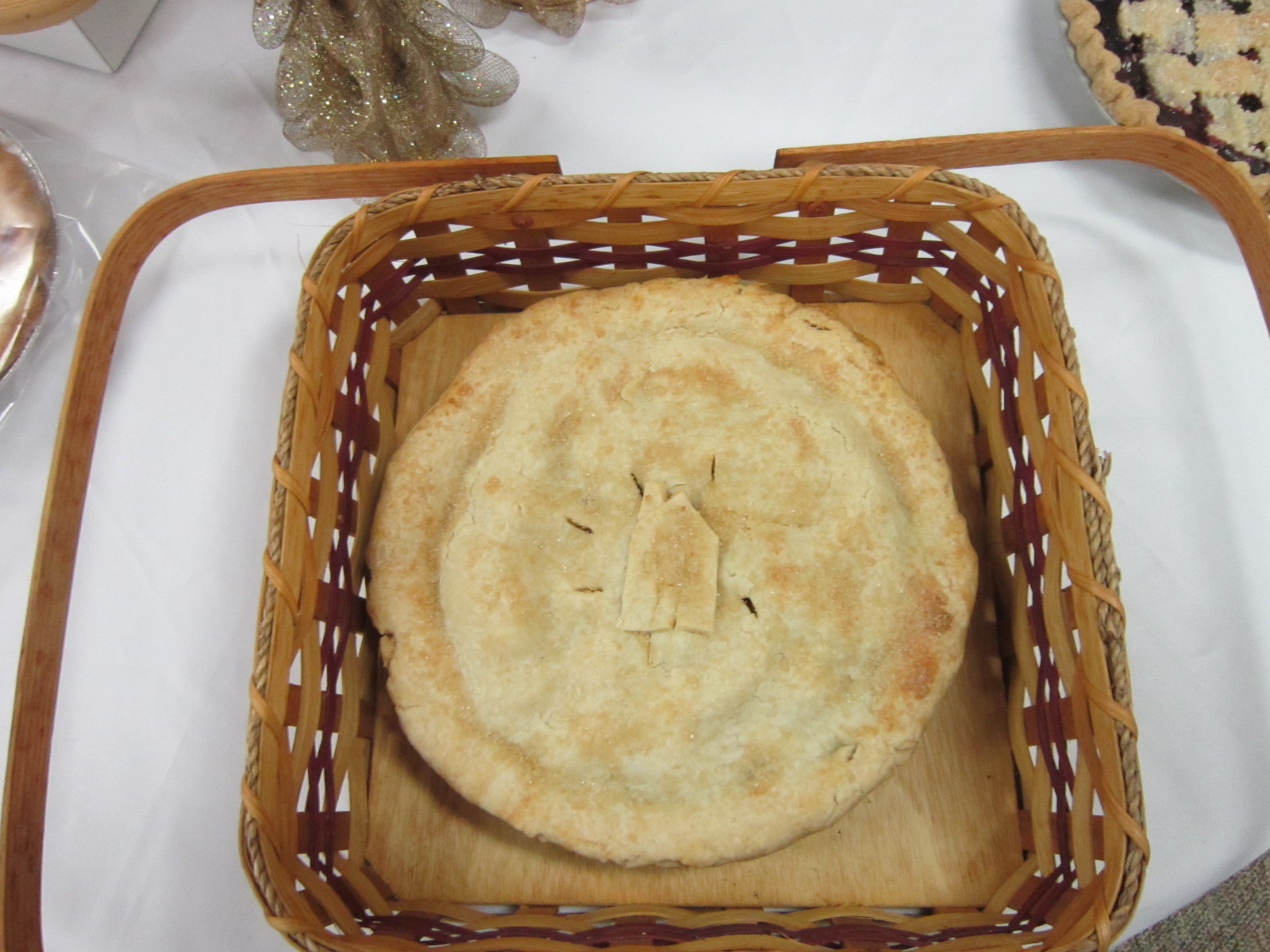 Carla Offenburger’s apple-blueberry pie, with the Habitat logo baked into the top crust, sold for $225. 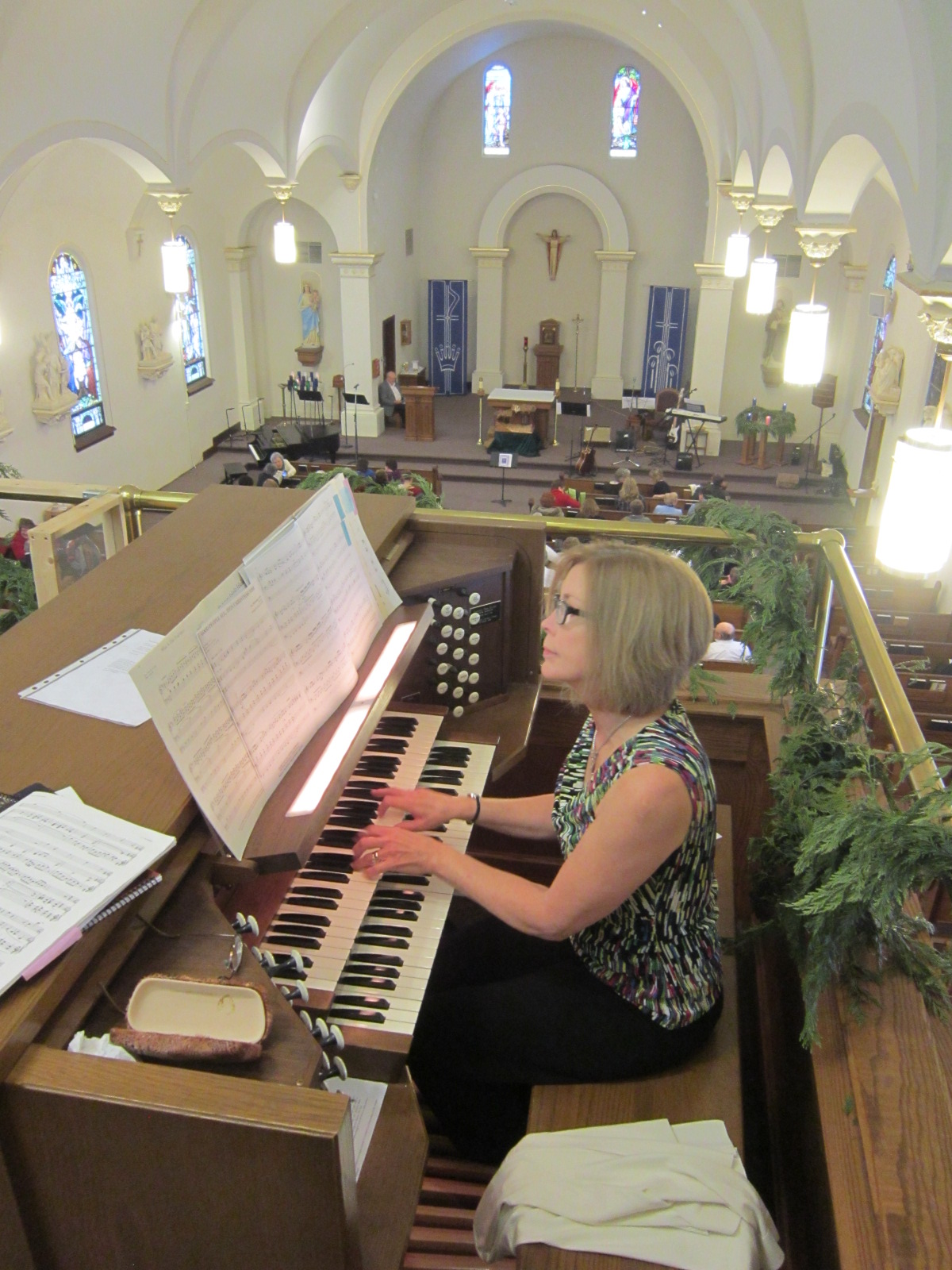 Rhena Lane led off the Habitat concert with gathering music on the organ in the choir loft at St. Joseph Catholic Church. 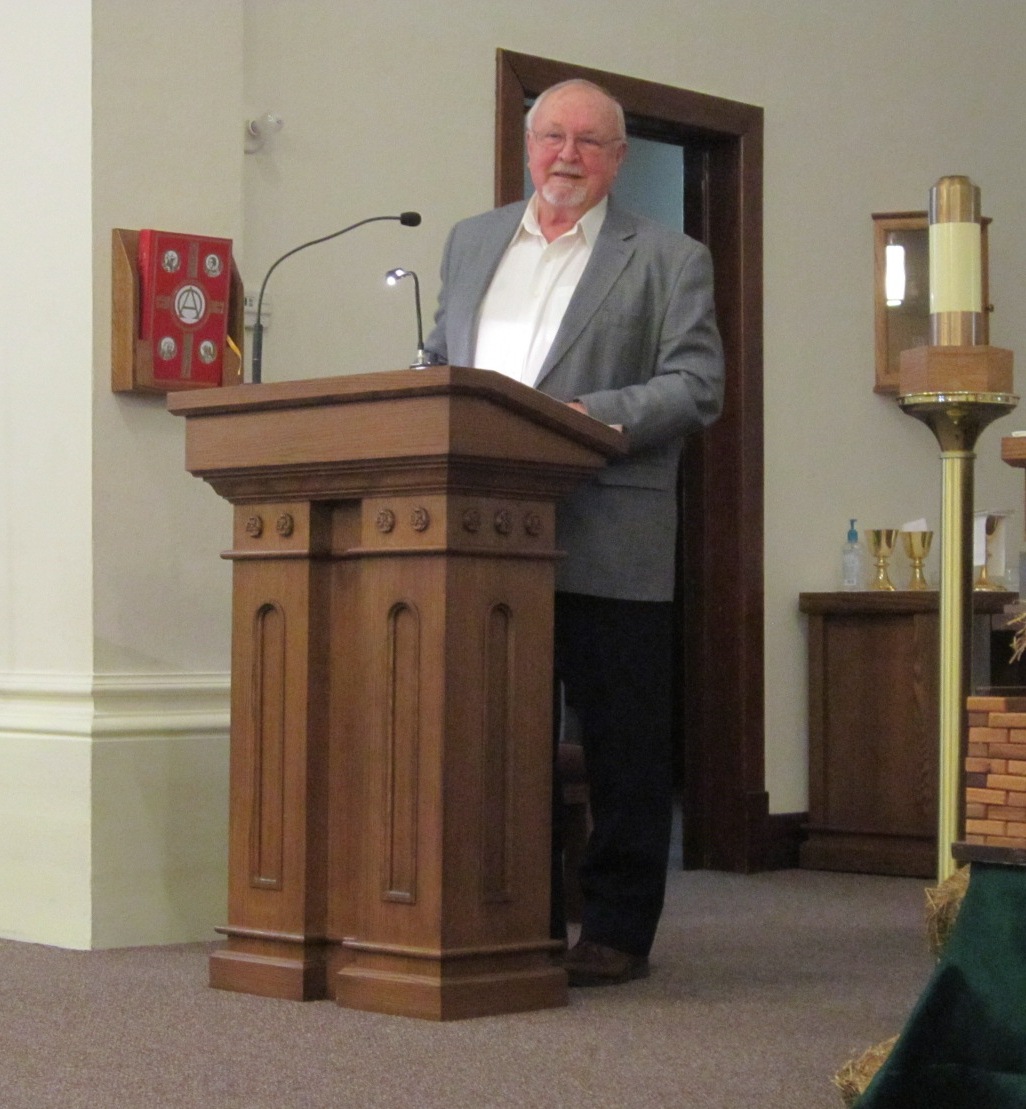 Harry Ahrenholtz, of Jefferson, president of Habitat for Humanity in Greene and Boone Counties, served as emcee for the benefit concert. 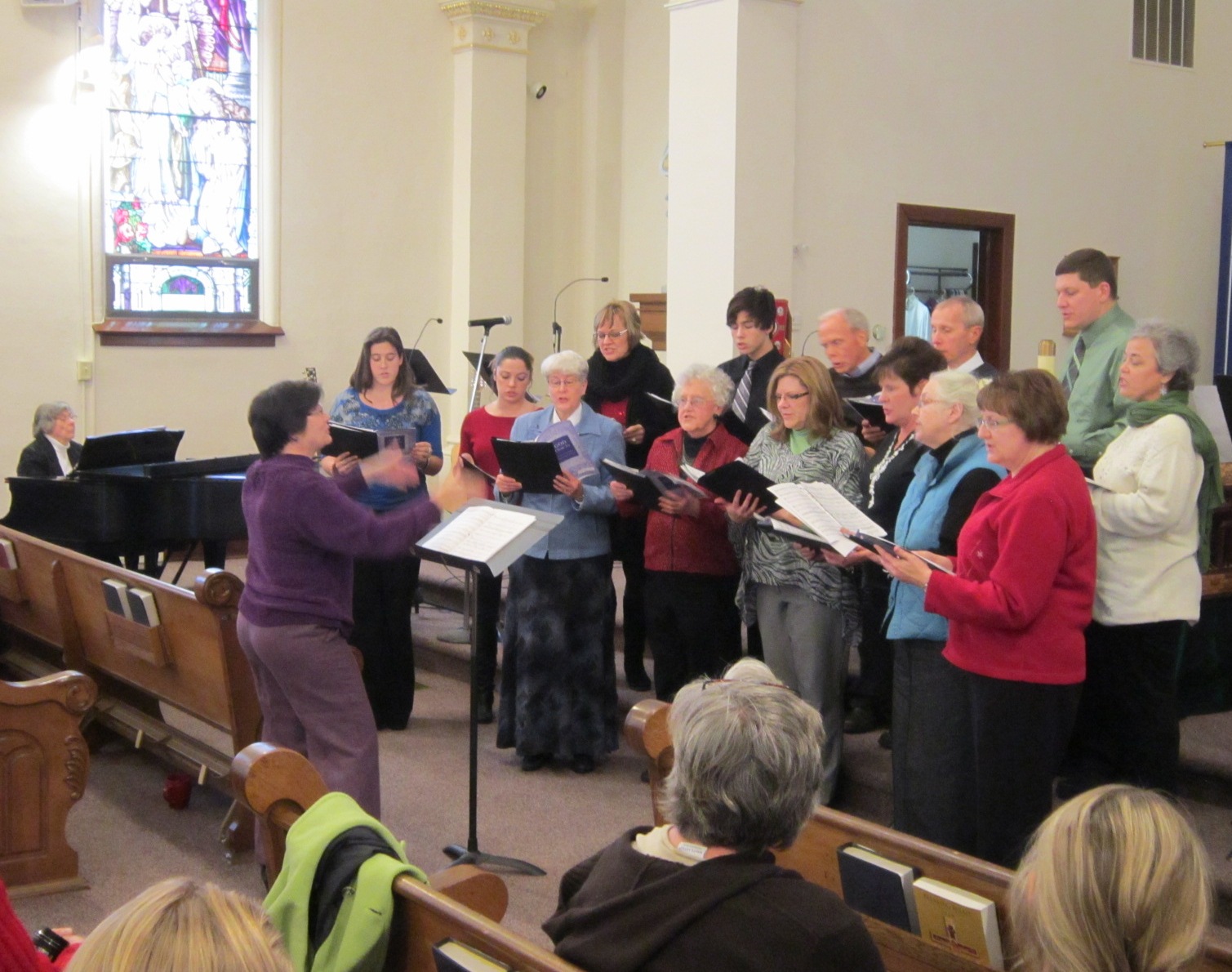 The parish choir of St. Joseph Catholic Church was the first choral group to perform and did a “Magnificat” that had been written in 1986 by choir members Doris McGregor and Iowa Supreme Court Justice David Harris, both now deceased. 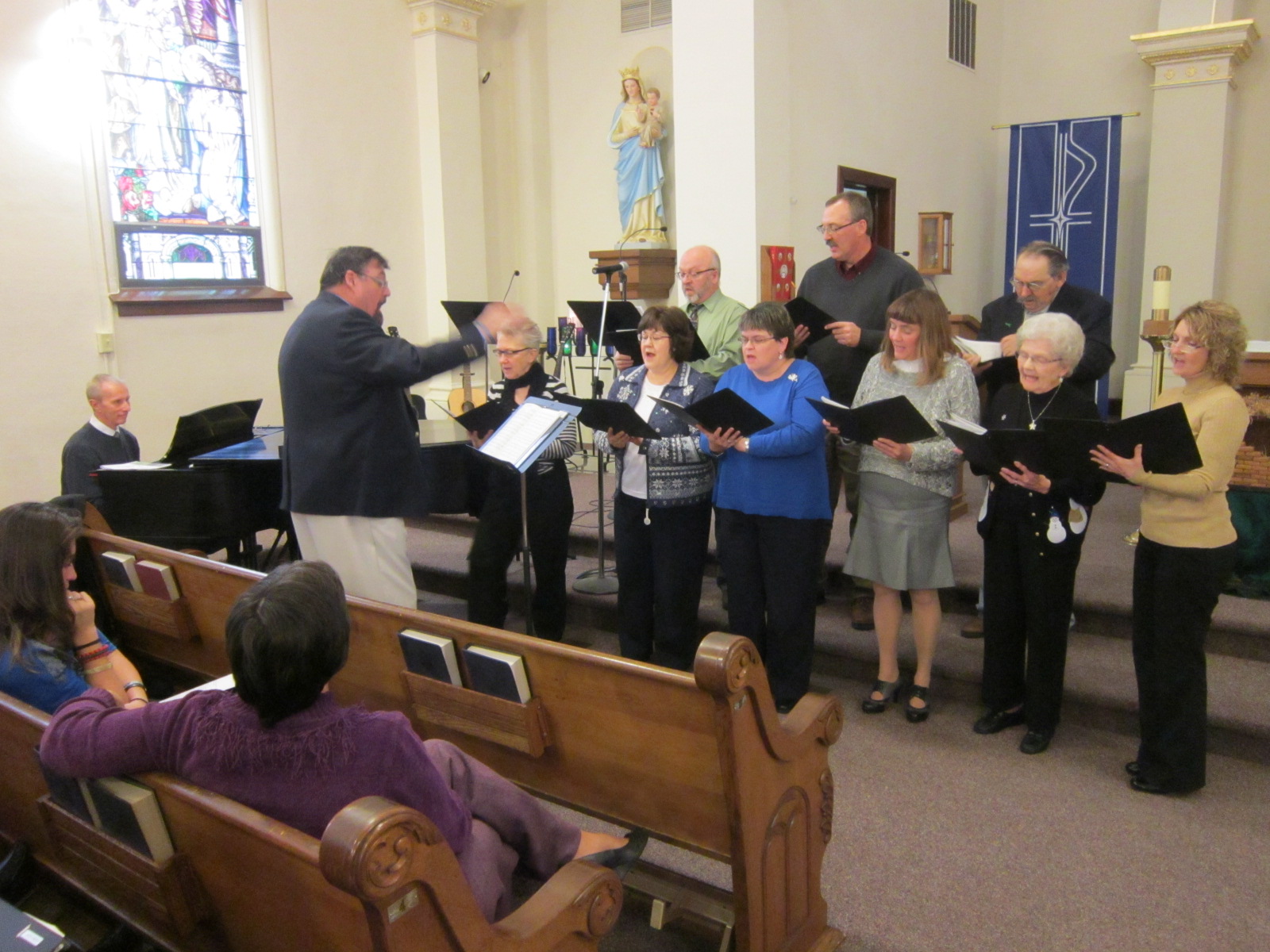 The adult choir from Central Christian Church in Jefferson. 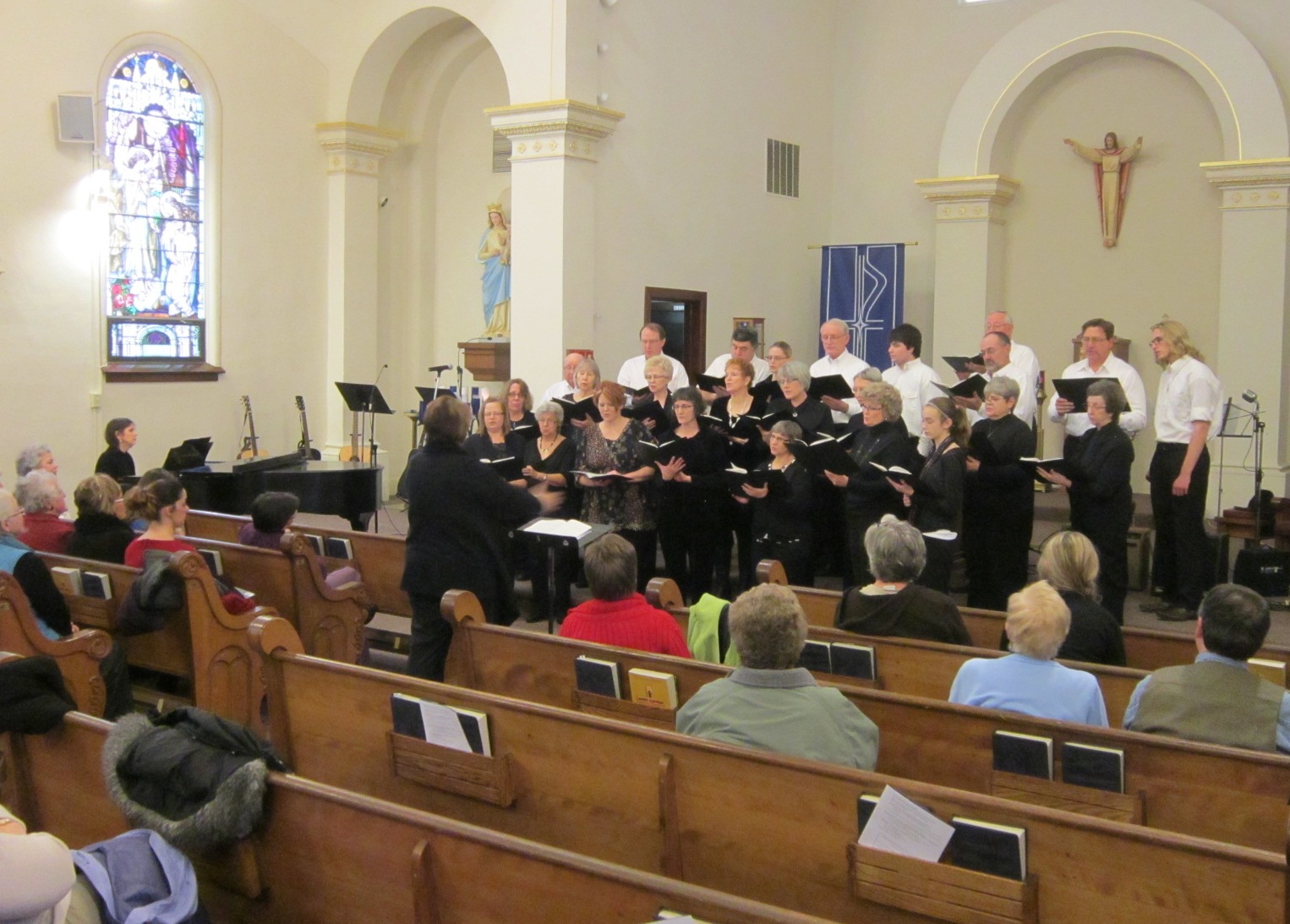 The Chancel Choir of the First United Methodist Church in Jefferson did selections from the Christmas Cantata they were doing in full during a service a week later. 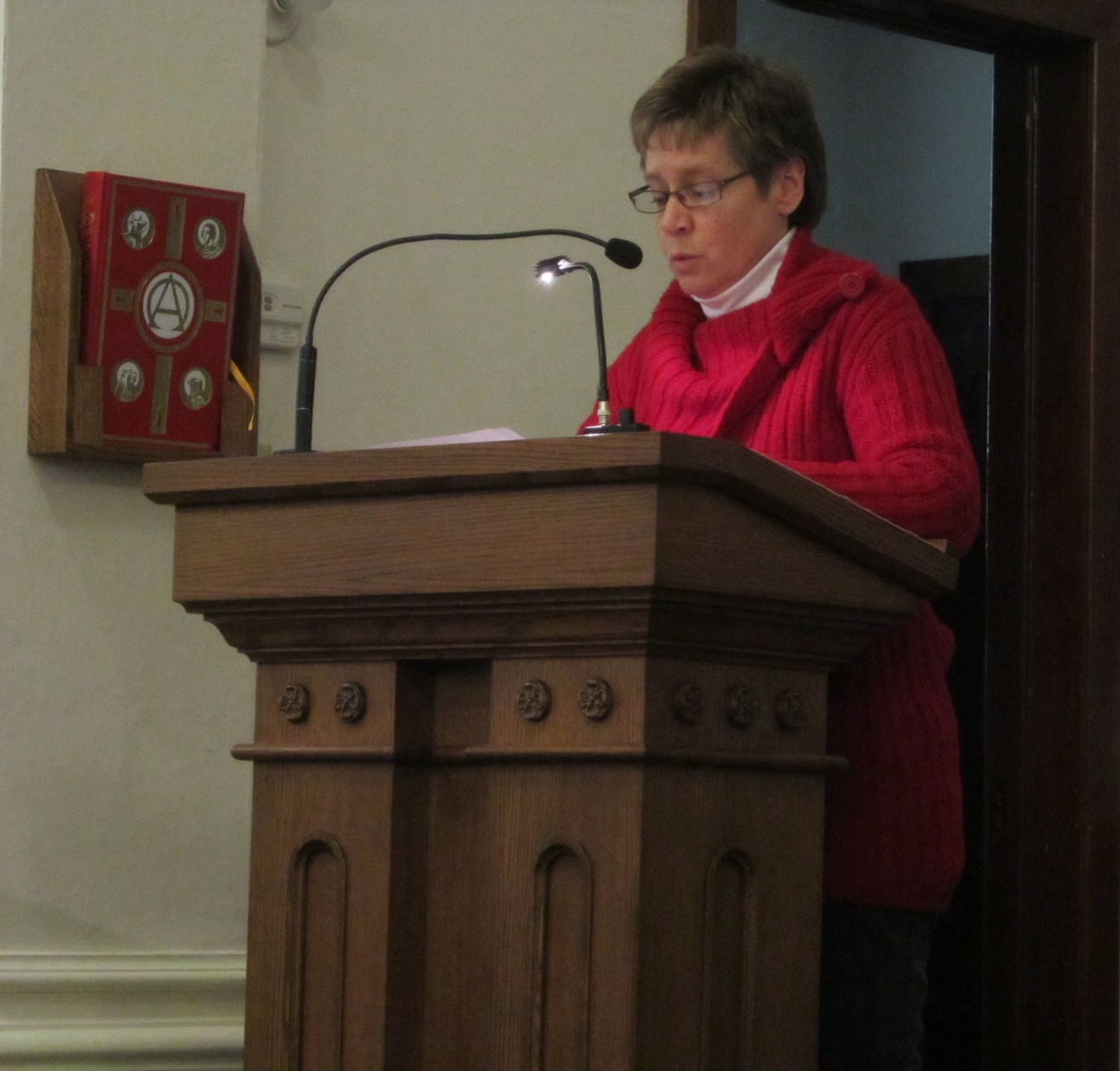 Poet Victoria Riley, of Jefferson, read the original poem “In a Stable” that she wrote for the Habitat event. 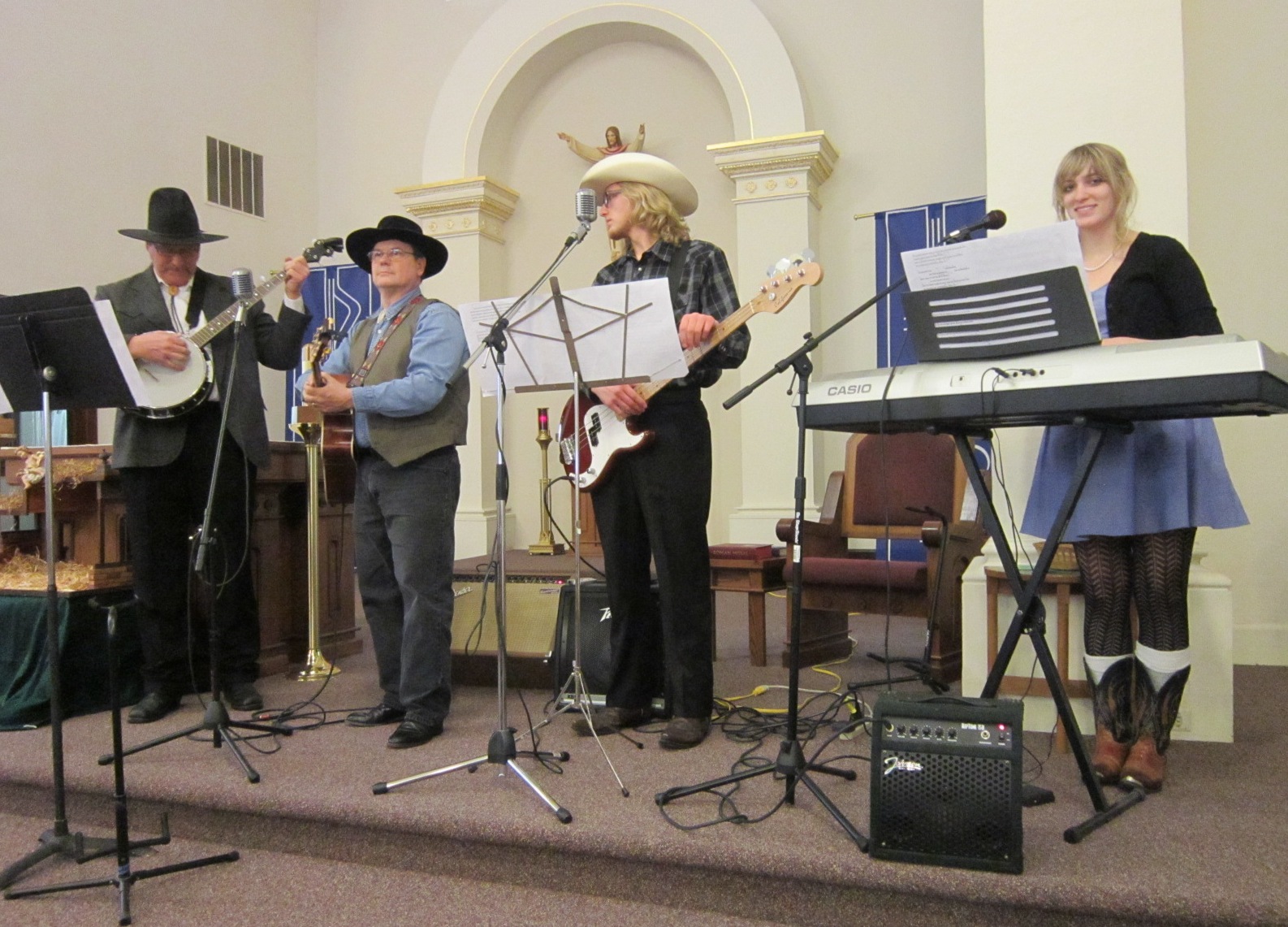 “The Nelsons & Dave Harding” performed Christmas selections from a country musical they’ve played in past years.  At the left is dad Curt Nelson of Jefferson, his friend Dave Harding of West Des Moines, and Nelson siblings Nic, a high school senior, and Molly, a junior at Drake University in Des Moines. 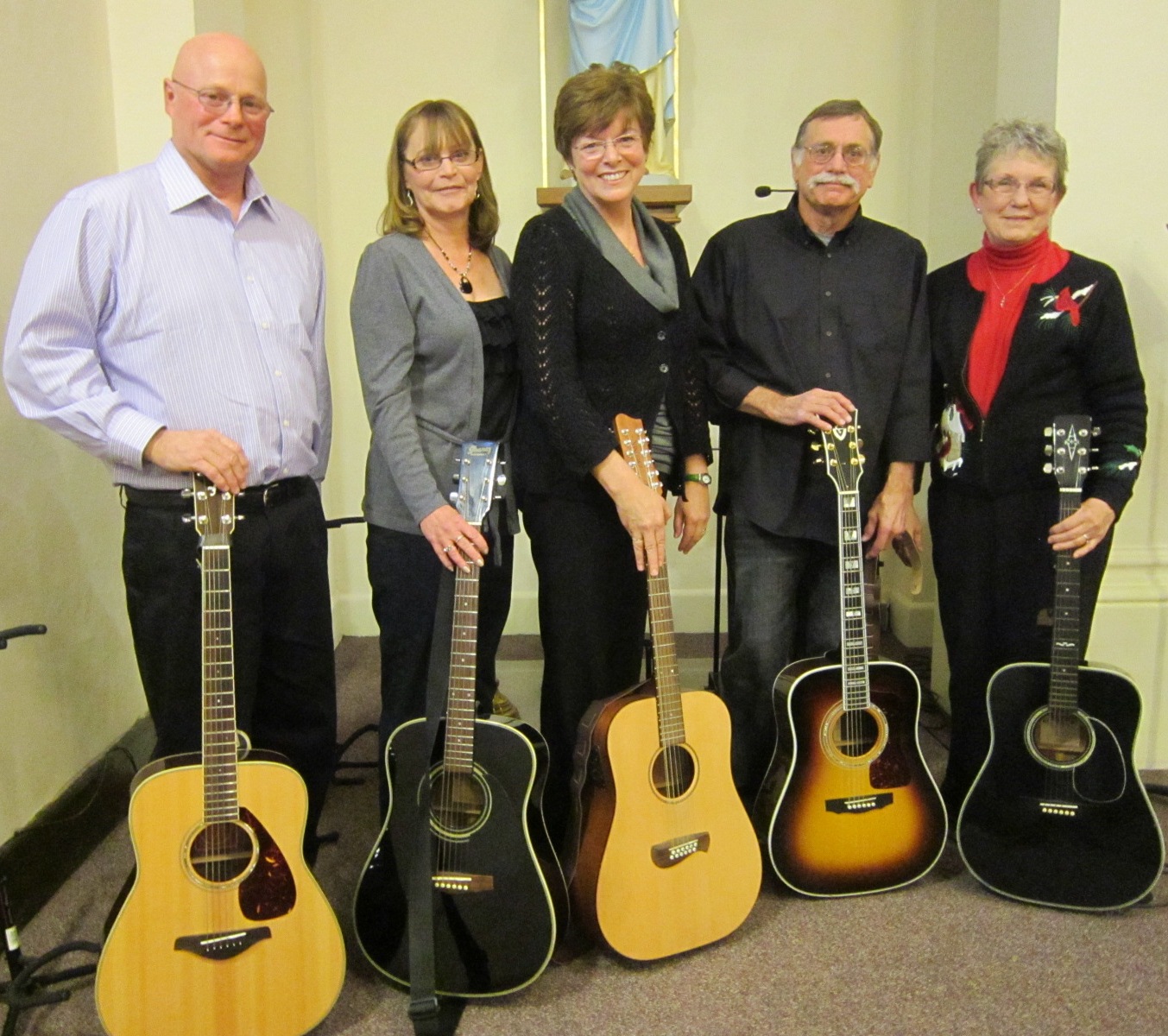 “The St. Joseph Guitars,” who have been playing together since the 1980s , played three numbers.  Left to right they are Dean Promes, Maureen Borkowski, Peg Raney, Jim Guillman and Marj Jane Fields.  One of their numbers at the concern was Mauren Borkowski’s “Can I Hold the Baby, Mary?” 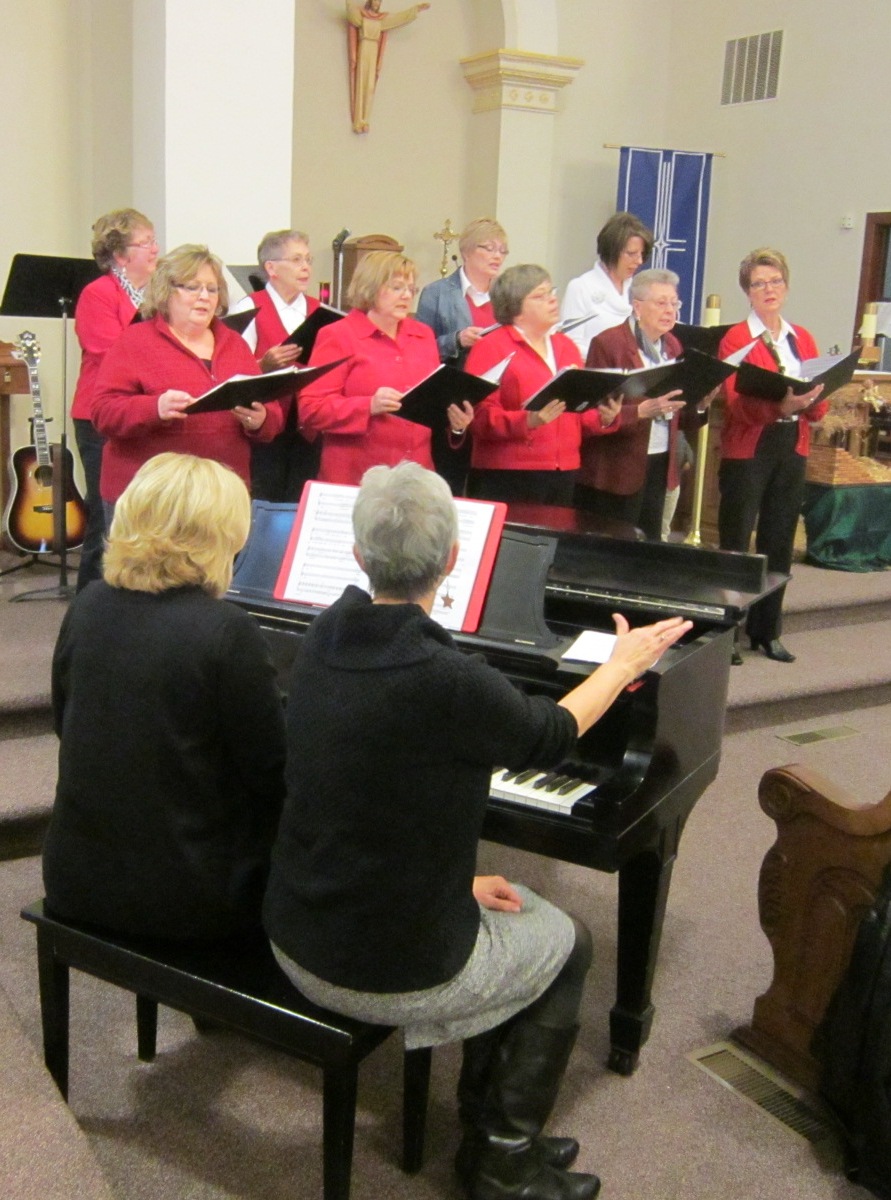 The “Joyful Noise” women’s choir from the First Presbyterian Church in Jefferson closed the concert with the beautiful “May the Good Lord Bless and Keep You.” 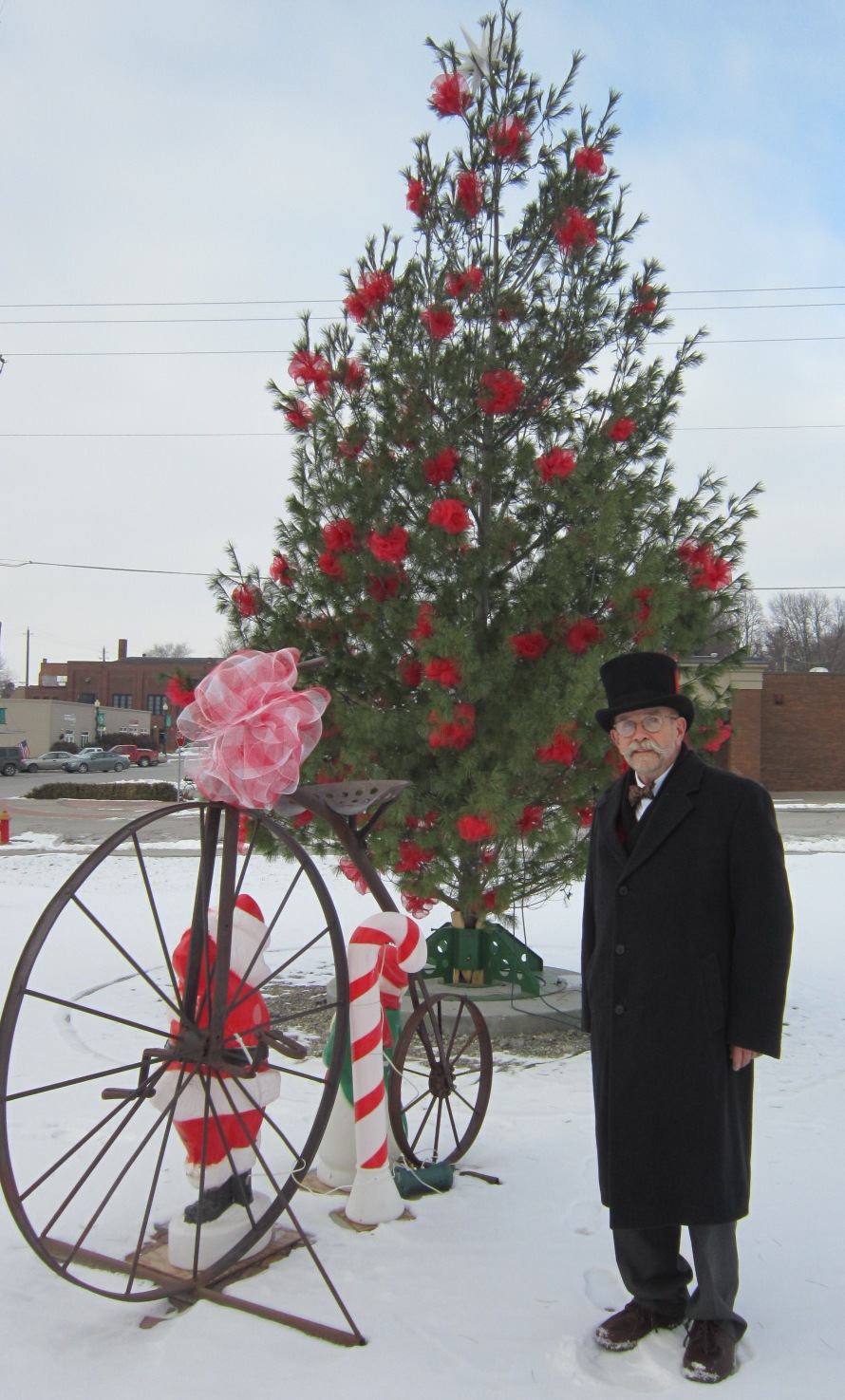 Our bicycling friend Allen Hall, of Malvern in southwest Iowa, is shown here dressed for a holiday outing while stopping by Malvern’s community tree — with a classic bicycle as part of it. 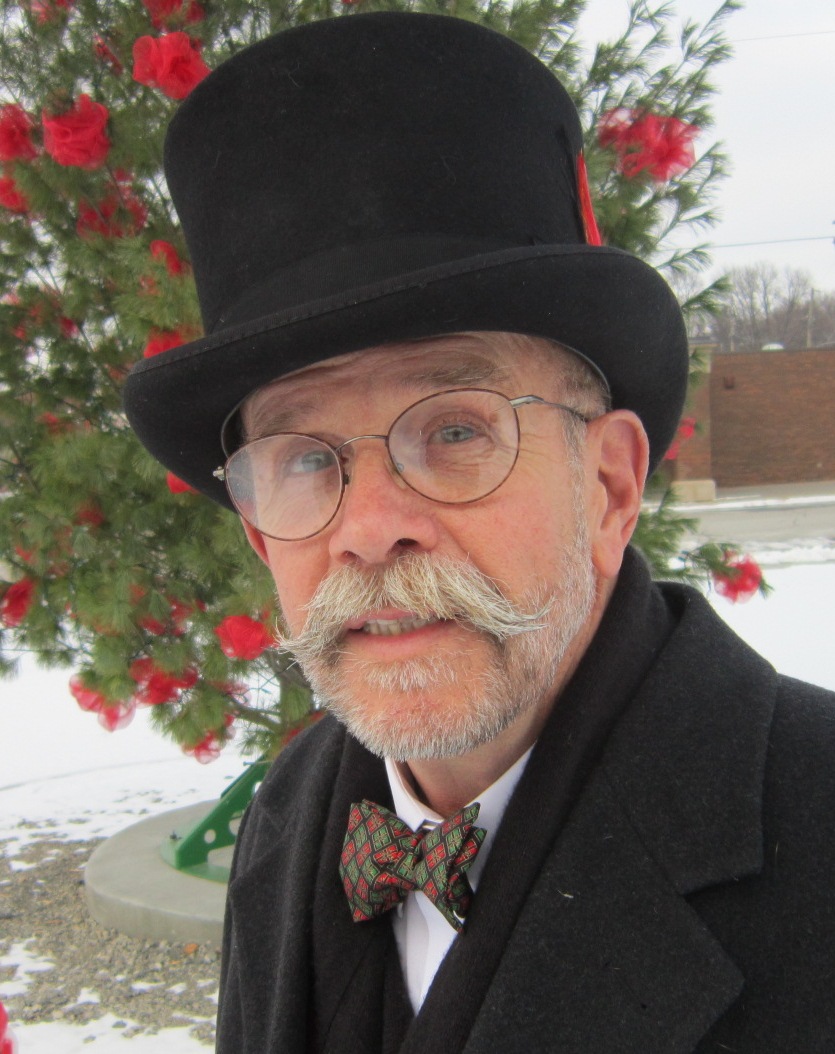 Hall looked like he walked off a classic Christmas card when he wore his top hat and long wool overcoat to go to another of our holiday traditions — the Wassail Bowl Stag in Shenandoah.  That’s a gathering of 200 or more men from around the area who meet for food, drinks and holiday best wishes, with proceeds given to the Shenandoah school nurse to help pay for essentials for students who need some help. 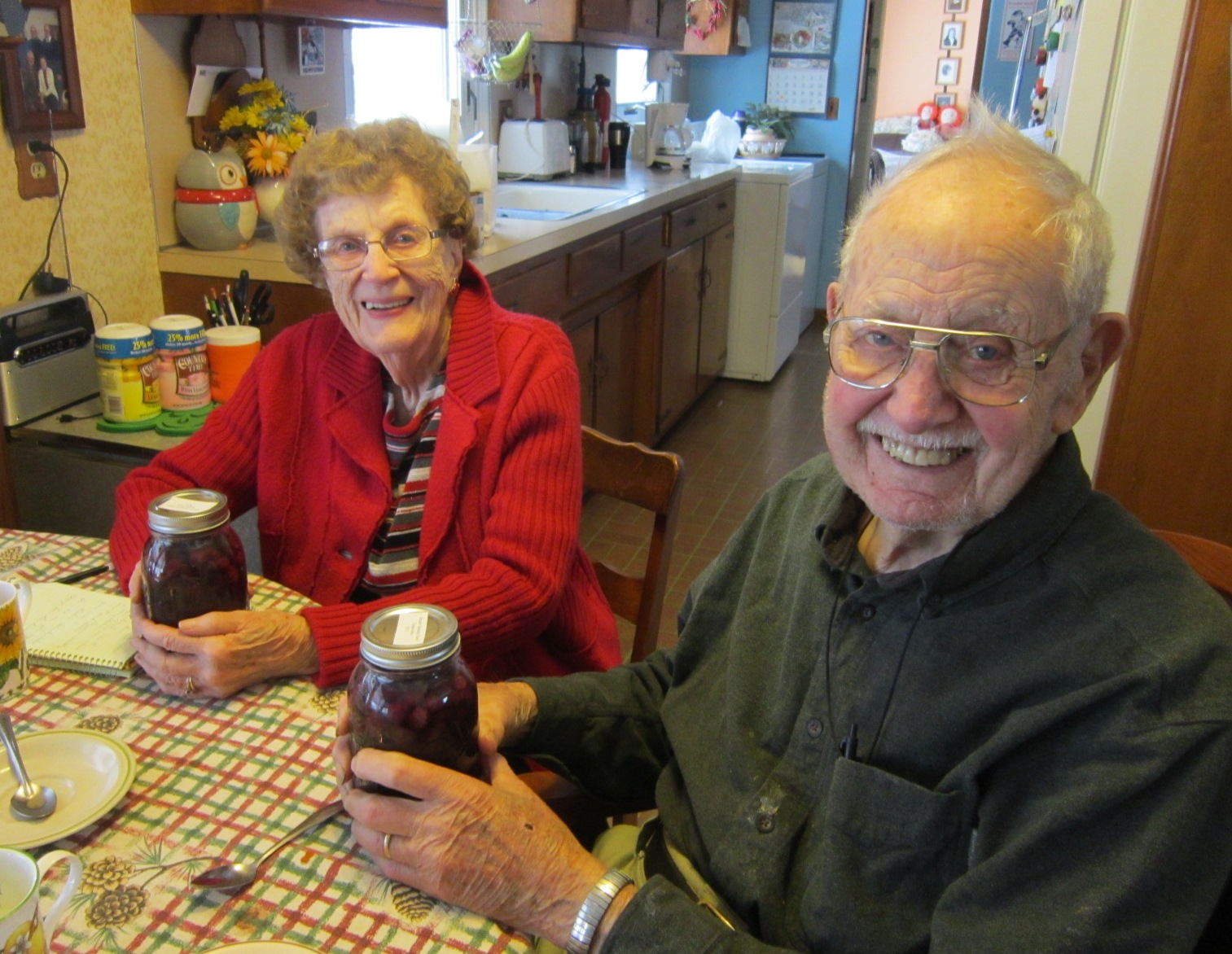 On that trip to southwest Iowa, we stopped by the home of our friends Evelyn and Robert Birkby, in Sidney, to deliver eight quarts of homemade grape juice.  Carla Offenburger had picked a big tub of grapes from the Birkbys’ vines in Sidney in early September, after Robert decided the crop hadn’t been good enough to warrant all the work.  Carla found enough grapes for more than a dozen quarts of juice, which she canned, and we were delighted to surprise the Birkbys with the results. 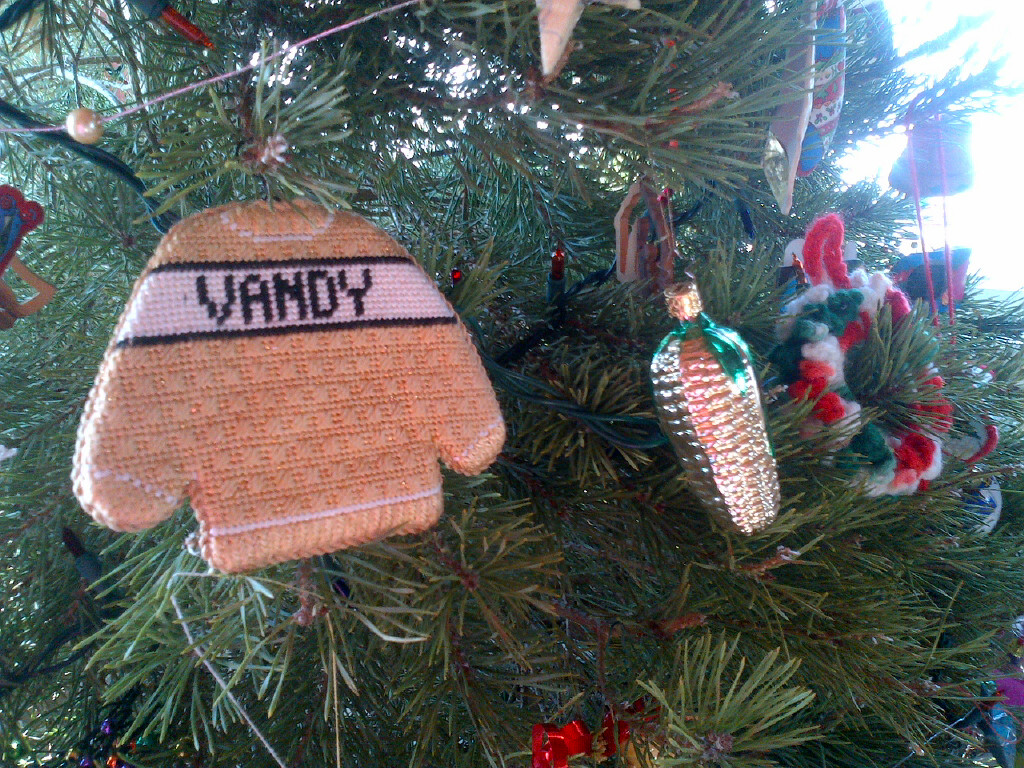 Part of the holiday fun for us Offenburgers has been anticipating a trip to the football bowl game that Chuck’s alma mater Vanderbilt will play against the University of Houston on Jan. 4 in Birmingham, Alabama.  One of Chuck’s college pals Judge Caryl Privett lives in Birmingham and will be our host.  The judge helped get us excited by sending us this mini-Vandy letter sweater she made as a Christmas tree ornament, and you can see we have it prominently displayed. 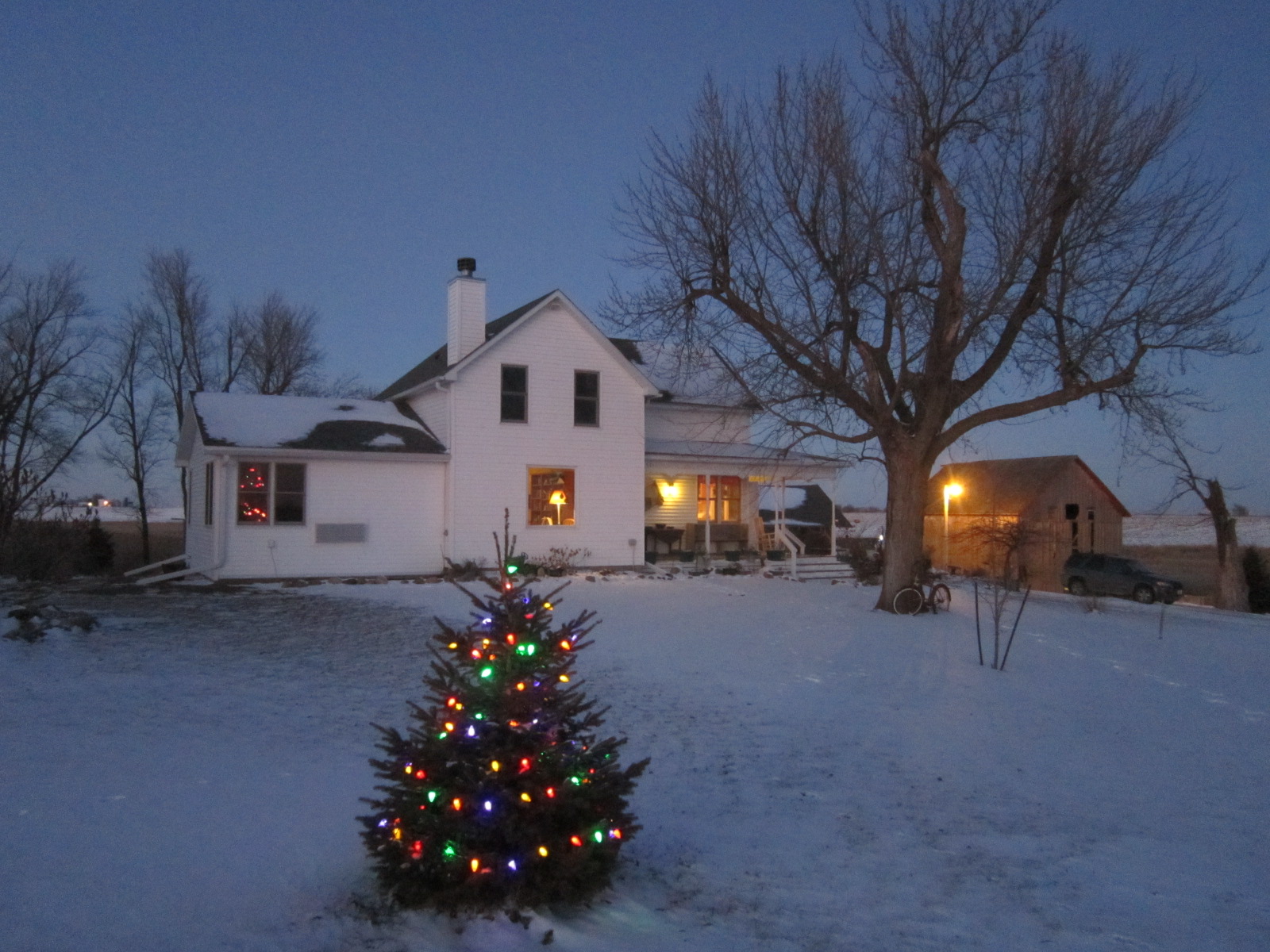 It’s all made for a very pleasant and meaningful Christmas season at our Simple Serenity Farm, as we call it.
You can write the columnist at chuck@Offenburger.com or can comment using the handy form below here.

One thought on “FEATURE PHOTOS: As Christmas came to us in Jefferson and Greene County this year”