JEFFERSON, Iowa, May 30, 2022 — When Michael Franken, the retired 3-star U.S. Navy admiral who is running for the U.S. Senate from Iowa, finished his presentation to a houseful of Greene County voters one evening last week, his host here Rick Morain told the old sailor, “I like the cut of your jib.”

The 64-year-old Franken, a native of tiny Lebanon in extreme northwest Iowa, has launched what some thought might be an unwinnable poliltical battle.

If Franken can win the Democrats’ nomination — and he appears to be leading as the June 7 primary nears — then he’ll challenge the most entrenched political incumbent in Iowa political history, U.S. Senator Charles Grassley. The 88-year-old Republican is seeking an 8th six-year term in the Senate, and that’s after earlier serving six years in the U.S. House and even earlier serving 16 years in the Iowa House. Thus Grassley’s political career has extended an amazing 63 years. 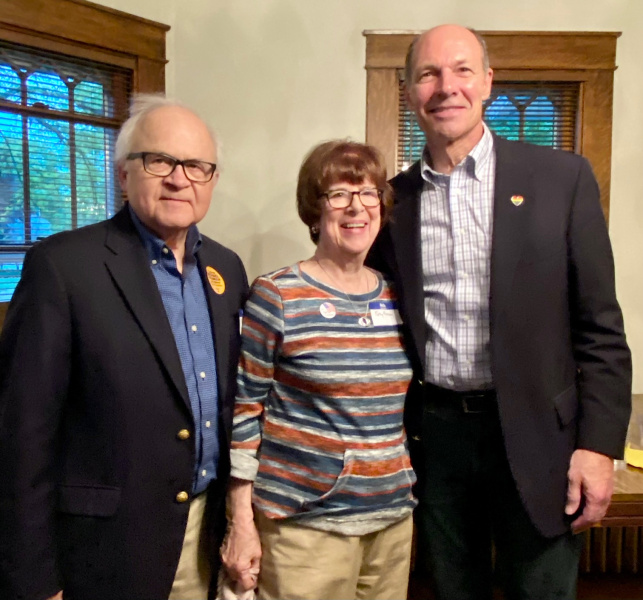 Having closely watched these races develop for seven months now, I endorse Franken in both the primary and general elections.  He should be Iowa’s next U.S. senator.

The most important reason is that Mike Franken is the best and most-qualified political candidate produced in Iowa since the Republicans gave us U.S. Congressman Jim Leach and the Democrats gave us former governor, now U.S. Secretary of Agriculture Tom Vilsack.

Franken is, in the best traditions of the U.S. military, a courageous patriot who served 36 years all over the world in command positions ranging from combat to counter-terrorism to Congressional liaison on military administration and international diplomacy.  He is whip-smart, an engineering graduate of the University of Nebraska, with extensive graduate study in military programs.  He is visionary, especially about agriculture and education.  Maybe most important, he is a small town Iowa guy whose big family and hometowns of Lebanon, Sioux Center and Sioux City turned into a kind person, strong family man and compassionate public leader.

If Franken wins the primary and is elected, he will be the highest-ranking military officer ever elected to the U.S. Senate. And my gut tells me that he’ll be one of Iowa’s finest representatives ever on the national scene.  It is going to feel good having someone with his knowledge, experience, respect and bipartisan reach working for us. 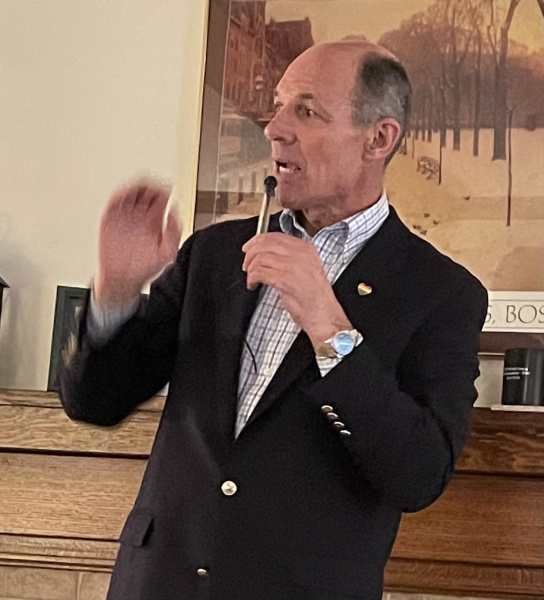 Franken has become a much more effective speaker during this, his second campaign, for the U.S. Senate.

What of the others in the Democrats’ primary field?  I first favored Finkenauer in this race.  I like her age — 33 — and her moxie.  But it’s become clear to me she is running a weak campaign, especially in the western half of Iowa. I just don’t see her being able to beat Grassley in the general election.  Dr. Hurst is way more liberal than I am.  His answers to questions during the campaign have hit me as simplistic, although left-leaning progressives like him.

As for Senator Grassley?  As I think about it, I think I’ve probably voted more for Grassley than I have for any other candidate in Iowa.  He was especially good for the state when Democrat Tom Harkin was balancing him in the Senate.

But, at 88 years old, with more than six decades of public service, Grassley has done more than enough.  He should have retired.  The final straws for me have been Grassley’s kowtowing to former President Donald Trump, and then Grassley’s more recent blind, spineless, partisan opposition to the nomination of Ketanji Brown Jackson to the U.S. Supreme Court.  He embarrassed us on that one.

It has taken me a good long time to warm-up to the candidate Michael Franken.

Two years ago, when he was one of four or five Democrats who were vying for the nomination to challenge U.S. Senator  Joni Ernst, the Republican incumbent, Franken ran a poor campaign.  He was relatively new back in his home state, after retiring from the Navy.  He seemed stiff and even a little condescending in many public appearances.

This is a much more relaxed, much more real Mike Franken on the campaign trail this cycle. 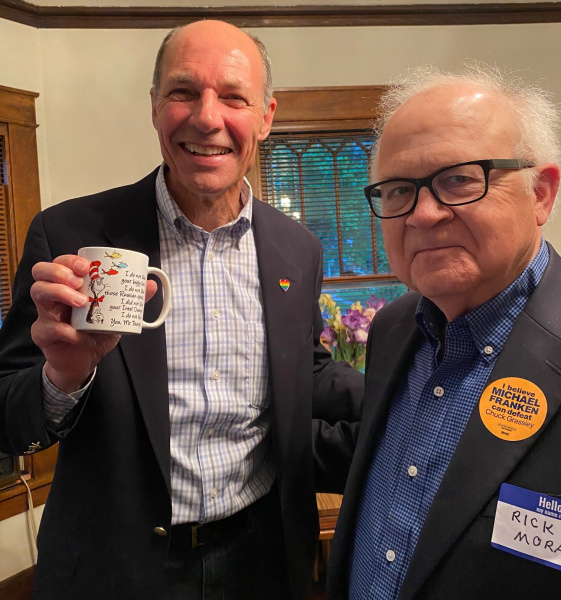 Franken, with a new coffee cup that his Jefferson host Rick Morain presented to him.  It’s has a “Dr. Seuss” style of verse poking fun at former President Donald Trump.

There are several reasons for that, but here are two of them that people are not really talking about.

Late last October, my ol’ pal and former Des Moines Register columnmate Julie Gammack authored an insightful essay on Franken in her online blog “Julie Gammack’s Potluck.”  She identified several weaknesses in Franken’s political game, perhaps most notably this one: “Oh, I hope he stops using words like ‘plethora’ when ‘plenty’ will do. It can come off as arrogance. I hope his advisors help him distill a 30-minute discussion into a 30-second sound bite. And I wish he wouldn’t call me ‘ma’am,’ although I get it’s a learned habit from serving in the military.”

I remember going to hear him speak a couple weeks later in Perry, and telling my friend Rick Morain — mentioned above as the co-host of Franken’s campaign chat last week in Jefferson — “O.K., I’m here, but if he uses the word ‘plethora’ once, I’m outta here!”

He didn’t use it that night.  And I haven’t heard him use it a single time since then, either. (But I did about fall off my office chair one night during a televised debate when I heard Franken, beginning an answer on how to rebuild withering small towns in rural Iowa, saying something like “if you want to use a Maslovian hierarchy method…”) 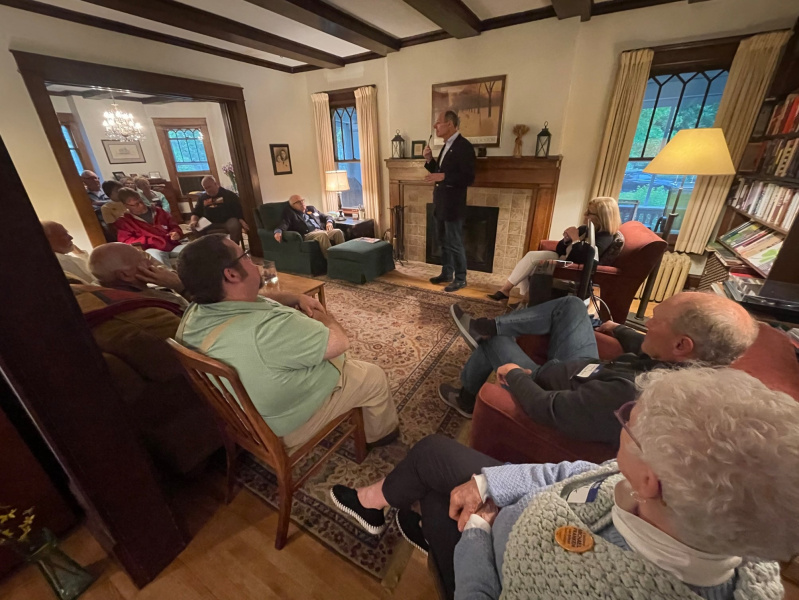 In his Jefferson reception, Franken filled these two rooms and two others in the home of Rick and Kathy Morain.

Generally, he has canned the snootiness, started talking about the contrasts he offers to Grassley and detailing how his experience, world view and connections can really help the U.S. in the complex and dangerous international relations of this era.  And he now has access and support to many of Iowa’s leading political donors.

Give some credit for those changes to the new Franken campaign manager Julie Stauch, who took over at the beginning of March.  She is an Iowa political veteran, having recently served as Iowa political director for the winning 2020 Iowa Presidential Caucuses campaign of Pete Buttigieg.  Word is that when Franken asked her to take command, Stauch made it clear, “You may be the Admiral, but I’m the campaign boss.” 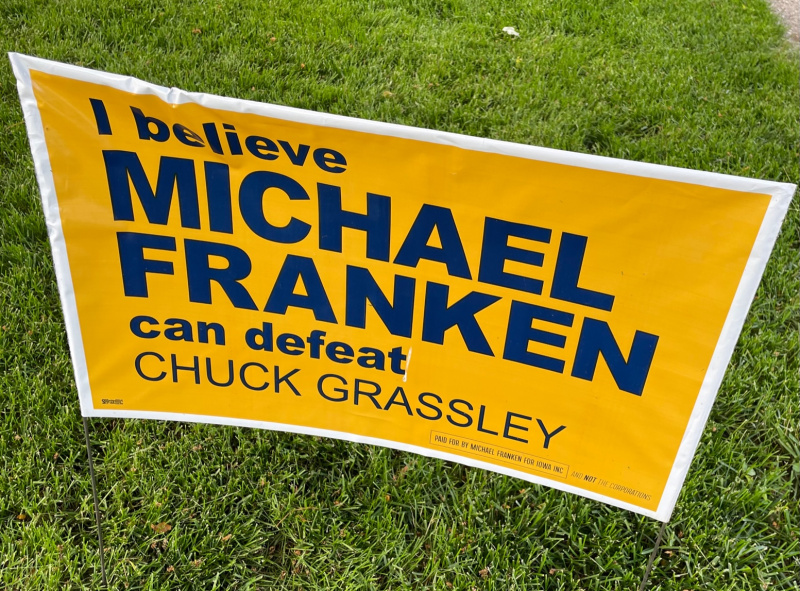 Some of the innovation in the Michael Franken campaign is evident in his signs popping up all over Iowa.  When have you seen a political candidate identify his or her opponent on a campaign sign?  But if your opponent is as well-known as Senator Chuck Grassley, why not use his coattails?