COOPER, Iowa, May 1, 2014 — Folks gathered last Saturday, April 26, at Sacred Heart Catholic Church in the northwest Iowa community of Laurens to say goodbye to an old pal of mine, Ralph “Bud” Reining.  I couldn’t be there, but I wanted to add my own farewell right here.

Loyal readers of my stuff over the years might remember Reining for his occasional appearances in my Des Moines Register columns from the mid 1980s until the late 1990s.  He was my “fashion consultant.”  All of Iowa came to know him as “Ralph of Laurens.”

He died at the age of 92 on February 16 at a care center in the Des Moines suburb of Altoona.  This past weekend was the best time for his daughter Jan Bloes, of Des Moines, and other family and friends to take him home to Laurens.

In the mid 1980s, the hottest fashion designer in America — maybe the world — was Ralph Lauren, whose booming business was headquartered in New York City.  One day, a Register features editor Pat Denato meandered over to my desk, carrying a photo of the handsome designer Lauren.

“You know, Ralph Lauren is all the rage right now among people who pay attention to fashion,” she said approximately.

“Yeah,” I probably answered, “and should that mean something to me?”

I specifically remember what she said next.

“So, you’re traveling Iowa all the time,” Denato said. “Do you know anything about the town of Laurens?” 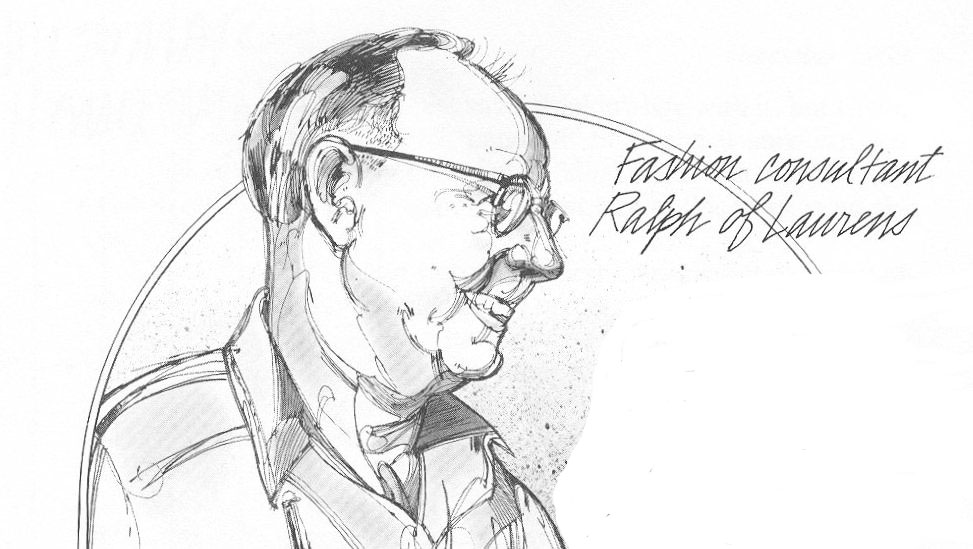 A 1992 drawing of “Ralph of Laurens” by the renowned Des Moines Register artist Mark Marturello.

My Laurens litany back then would have included that it’s the town where the airport was on one of the golf course fairways; it was the hometown of our former editor Bill Maurer, whose family ran the Laurens Sun; it was also the hometown of the Ziegler brothers who led the Laurens High Elks to basketball glory in the early 1960s; I think I remember a big grocery wholesale company there, and I knew from earlier trips that the meeting place for coffee every day was George Rexall Drug.  “How’s that?” I said.

Denato answered, “Well, do you suppose there’s anybody there named Ralph?  I was just thinking it’d be kind of fun if you found a Ralph in the town of Laurens who could give you fashion advice. ‘Ralph of Laurens.’  Kind of like ‘Ralph Lauren,’ you know?”

I loved the idea.  Several lives were about to change.

I was on the phone immediately to Homer George, owner of the drugstore, whom I’d met earlier during those local coffee gatherings.  We talked fashion a few minutes, and then I asked him, “So, do you have any Ralphs there in Laurens?”  The pharmacist give it some quick thought.  “I can think of two Ralphs here,” he said. “One has been in some trouble and he wouldn’t work at all, if you’re going to make him some kind of spokesman for you.  The other Ralph is Ralph Reining.”

He told me that Reining, then in his early 60s, was a great guy, part-time rural mail carrier, part-time barber, part-time school bus driver. “We all call him ‘Bud’,” the pharmacist said, “and the only problem you’re going to have with him is that he’s sort of shy.  I’m not sure you’ll be able to convince him to be talking about fashions with you for your columns.  I’d suggest you talk his wife Dorothy into this first, then talk to Bud.”  George said he’d visit with the couple about my idea, too.

A day or two later, I phoned the Reinings in Laurens, got Bud on the phone and told him briefly how I wanted to turn him into “Ralph of Laurens,” and make him a fashion expert — or at least have him commenting with his special small-town, rural-Iowa view of fashions.  He said he’d heard of Ralph Lauren, the famous designer, but didn’t know much about him, and I assured him I didn’t, either.  I told him to think about becoming my “Ralph of Laurens” and, meantime, let me talk to his wife.  He handed off the phone to “Dort,” as he called her.  She and I hit it off immediately.  I talked through my proposal with her, asked her to talk more about it with Bud, then call me back and let me know.

Another day or two later, my newsroom phone rang at the Register.

“Chuck Offenburger?” the male voice asked, and I said yes.  “This would be ‘Ralph of Laurens’ calling you.”

And thus began a whole lot of fun over the next dozen years or more.

Two or three times a year, usually at the start of the spring and fall fashion seasons, I’d have a column with the “Ralph of Laurens” forecast for what Iowans would be wearing in the weeks and months ahead.  We began with a description of his own wardrobe.  He thought the most ideal item of apparel ever designed were the one-piece, cotton jumpsuits that he wore regularly in hot weather.  Why’d he like them so much? “They’re free and easy,” he said.

In cooler weather, he’d opt for polyester trousers or khakis, plaid shirts, brown suspenders and sensible, comfortable shoes.  I’m hoping I got him into a pair of the fashionable black & white saddle shoes over the years, but I’m not sure I did — they were probably a little showy for his tastes.  At one point, Dort bought him a really nice, dark, conservative gray suit, and added a pink shirt, which he didn’t really care for, but as he said, “I almost never wear the suit.”

When he was putting together his fashion forecasts, Ralph of Laurens would take them seriously enough that he would walk up the street in Laurens to Schubert’s Clothing (for men and boys) and Evelyn’s (for women) and gather the opinions of the pros there.

He generally began by predicting that in any season, a majority of men would be in blue jeans and ball caps, “which are good anytime.”  One year, he went a little crazy at how “the younger guys now are getting into real baggy pants, ones that are big enough that their girlfriends could get right in there with them.  And they think they’ve just discovered double-breasted suit coats and pleated pants (for when they dress up).  Those are going to be big this fall.  Know what they remind me of? Zoot suits!”  He said when men’s fashions started showing more bright colors, “it’s the peacock effect.  Kind of show-offy.”

As for women’s fashions that fall, “look for tighter clothes, more dresses, higher heels and big chunks of jewelry.”

He also continuously foresaw the return of the mini-skirt, and the truth is, I was usually campaigning for it, too.  I remember once that he and Dort were traveling in Las Vegas, and he called me up at the Register in the middle of the day, breathlessly telling me, “Guess what!  I just saw one!”  Uh, I said, saw one what?  “A mini-skirt!  They really are coming back!”

Yes, he got to the point where he was not only willing to take part in this fashion fun, he really became comfortable doing so.  After a couple years, Dort either made or bought him a white, loose-fitting, short-sleeved, wide-collared sport shirt — kind of like a bowling shirt — with “RALPH OF LAURENS, Fashion Expert” embroidered on the back.

He and I even got invited to be judges in fashion shows — I remember one in Fort Dodge, another at Okoboji.

In the mid 1990s, our RAGBRAI staff had an opening for a straight-truck driver, hauling equipment and some luggage.  When then-RAGBRAI director Jim Green asked me if I knew any possible drivers, I told him that I knew Ralph of Laurens had the proper license, since he was a school bus driver.  And for the next several years, Bud and Dort became popular members of the RAGBRAI road staff.

When I left the Register in 1998, that ended the “Ralph of Laurens” fashion forecasts, but we’d see each other on RAGBRAI and check-in by phone a couple times a year.

We were all really concerned for him in 2001, after his greatest pal Dort died.  He eventually moved to the Des Moines area to be closer to his daughter and her family.

“Oh my, he was lonely for a while,” said the daughter Jan Bloes.  “But then four guys he fished with around Laurens really stepped up, and helped him adjust.  That continued for the rest of his life.  They even came down and spent some time with him when he was in the care center.”  Those four friends were named in the obituary — Arlo “Doc” Samuelson, Dave Evans, Tom Kass and Ben Winkler.

Another of Bud Reining’s favorite times was in 2011, when he and daughter Jan were aboard one of those “Honor Flights” taking World War II veterans to Washington, D.C. to view the national monuments.  He’d received a Purple Heart for his three years during the war. 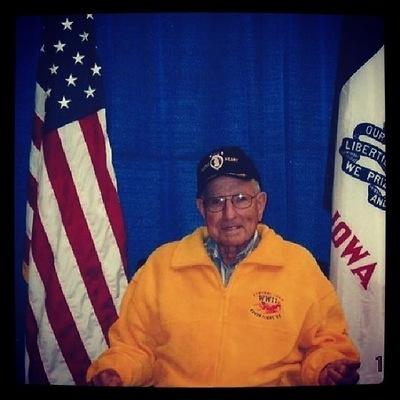 The decorated old soldier Ralph “Bud” Reining, of Laurens, in his later years.

7 thoughts on “A farewell to an ol’ pal, the “fashion consultant” “Ralph of Laurens””