CENTERVILLE, Tenn., March 14, 2022 — I’m back in Centerville tonight, staying with my great friends Doug & Molly Bates, on my way home to Iowa after spending the weekend in Atlanta, Ga. Late this afternoon, Doug and I drove out to one of our favorite haunts in his Hickman County, the old Tarkington General Store on the banks of Hassell’s Creek in a deep wooded hollow.

I’ve written that it’s the most Tennessee-looking place in Tennessee. 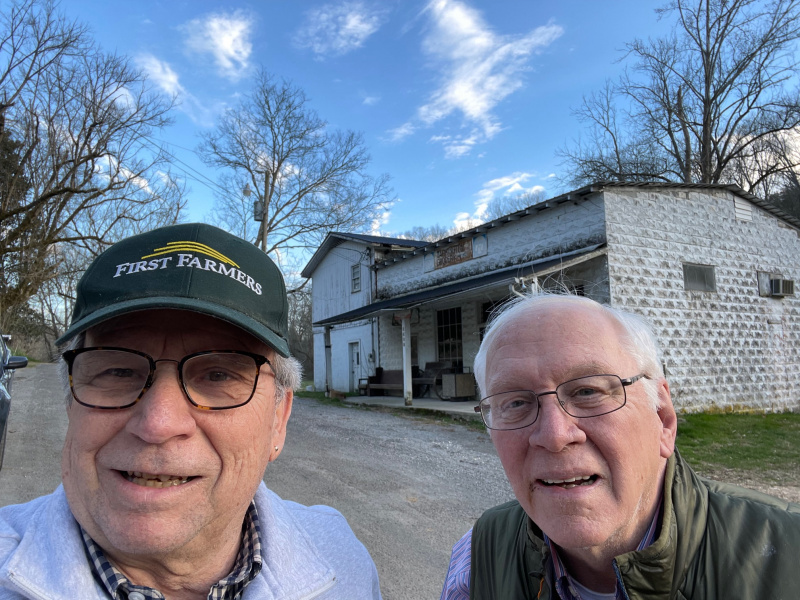 It’s also the headquarters for our “Tarkington Society,” a group Doug, Molly, my late wife Carla and I founded in 1992 to celebrate “friendship, eternal sophomorism and stress reduction.”

To be a member, you had to come to the Tarkington Store when the four of us were meeting there; get one of the famous bologna sandwiches made by store co-owner Elizabeth Tarkington; take off your shoes & socks and wade out into Hassell’s Creek; eat your sandwich out there, and then take the pledge to the society’s three tenets mentioned above.

You probably understand the “friendship” and “eternal sophomorism” involved here. But what of the “stress reduction”?

Well, no matter what time of year we were there, the water in Hassell’s Creek was always so cold that you instantly forgot whatever was stressing you out when you waded out there.

Crazy as it sounds, we swore-in 350 or more members over a period of about 10 years before we became less active. Among those members — former U.S. Senator & Tennessee Governor Lamar Alexander.

Now the store is apparently only open for special events, Elizabeth & C.W. Tarkington have died, and Carla has passed away, too.

But Tarkington General Store will always hold a special place in our hearts.

One thought on “Re-visiting a special place in a deep hollow in Hickman County, Tenn.: The Tarkington Store”